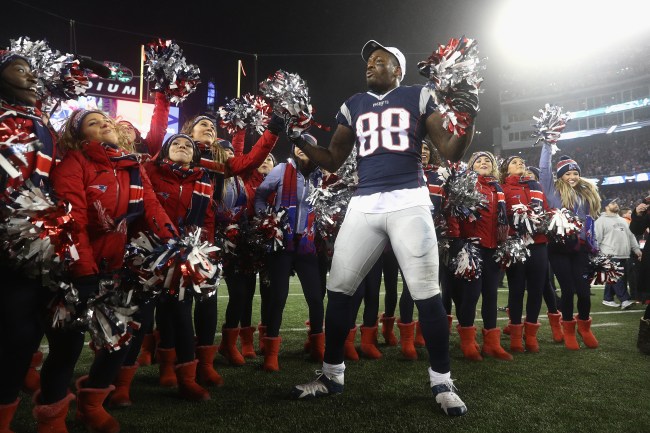 Super Bowl LI will go down as one of the most dramatic Super Bowls in the history of American football. For those in Atlanta that need a reminder, the Patriots went into the locker room at halftime trailing the Falcons 21-3. They added another score in the third to balloon the lead to 28-3 with 8 minutes left in the third quarter. As a Patriots fan, I threw a Super Bowl party at my apartment and everyone was so sick their stomach, no one ate my fucking spinach dip.

Welp, in the final 21 minutes of the game, the Patriots outscored the Falcons 31-0 in route to the biggest comeback victory in Super Bowl history and we were basically smearing the spinach dip one act other’s faces in celebration.

Martellus Bennett, who signed with Green Bay this offseason, recently sat down with INC.com for an interview, and detailed what the vibe was in the locker room at halftime when his Patriots were getting embarrassed in front of the world.

“There was none of this epic ‘We’re going to come back,’ ‘Rudy,’ ‘Remember the Titans’-type speech. There was none of that TV [expletive],” Bennett said. “When you looked around the locker room, you didn’t see anyone that was discouraged, you didn’t see doubt in anyone’s eyes, and that’s like all 53 guys. You looked around and you could see that everybody was determined to figure out what they could do to help us win.”

“So we went back out there at halftime, we kind of got up, coach gave all the coaching points, all the changes,” Bennett said. “Everybody was like, ‘Alright, coach. This is the plan you have, coach. I trust you. This is what you think is going to win. That’s exactly what we’re going to do. And I’m going to do my part, my small equation of the 11 that’s on the field at the time.'”

“[We] put our hands up, ‘Hey, this is going to be written in the history books. Patriots on three. One, two, three, Patriots, break.’ And the rest is history,” Bennett said.

Bennett goes on to describe that chunk of football as “the most focused I’ve ever been.” He would go on to secure his first Super Bowl victory in his decade long career.