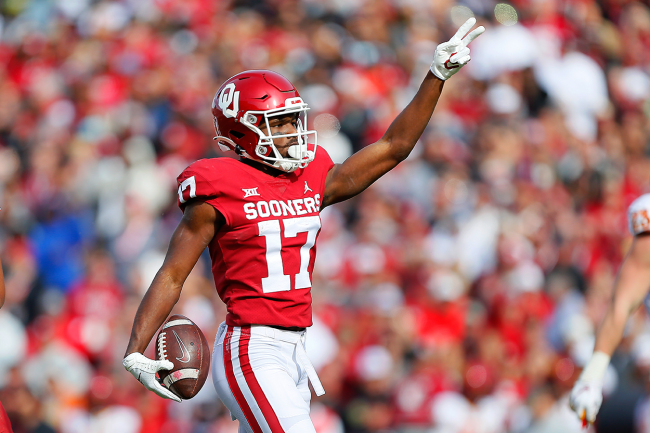 Marvin Mims is slated to be one of the top passing targets at Oklahoma this fall, if not the top target for quarterback Dillon Gabriel. However, he almost left Norman during the offseason and would have if Lincoln Riley hadn’t.

Mims, a four-star recruit in the Class of 2020, set the Texas state high school record for career and single-season receiving yards. He averaged an astonishing 22.5 yards per catch as a senior in 2019.

That led him to being as confident in himself as possible.

“The confidence level was just out of the roof,” Mims said to 247Sports. “I just felt like I could do anything and everything when I went out there on the field.”

Upon arrival at Oklahoma, it was clear that his production was not slowing down. He caught 37 passes for 610 yards and 10 touchdowns as a freshman with the Sooners.

Mims followed up his impressive first year with 705 yards and five touchdowns on 22 yards per catch in 2021. However, his opportunities to make playe just weren’t there. He drew eight fewer targets as a sophomore than he did as a freshman.

As a result, Mims was frustrated.

“There wasn’t as many targets as I was looking for, nowhere near it,” Mims told 247 Sports. “It was kind of a letdown, but at the end of the day I had to just keep battling through it. There were times where I was really unhappy about it with both the receiver coach and the offensive coordinator, but it was what it was.”

Following the season, the 5-foot-11, 177-pound receiver was prepared to transfer. He wanted a fresh start in a new system that provided him more opportunity to ball.

And then that change came. Lincoln Riley left for USC and Oklahoma hired Brent Venables. Venables then hired Jeff Lebby away from Ole Miss to be the Sooners’ offensive coordinator.

In each year that Lebby has led an offense, his top receiver had at least 70 catches and at least 1,000 yards. Mims decided to stay.

“Lebby didn’t have to really talk much to me to get me to stay, especially with the offense he runs,” Mims told 247 Sports. “You’re talking about one of the top three offensive coordinators in the country statistically. He’s just a great guy.”

When the Sooners take the field in 2022, Mims will likely be atop the depth chart as the team’s starting Y receiver. He hopes that this fall is finally his chance to truly breakout onto the scene.