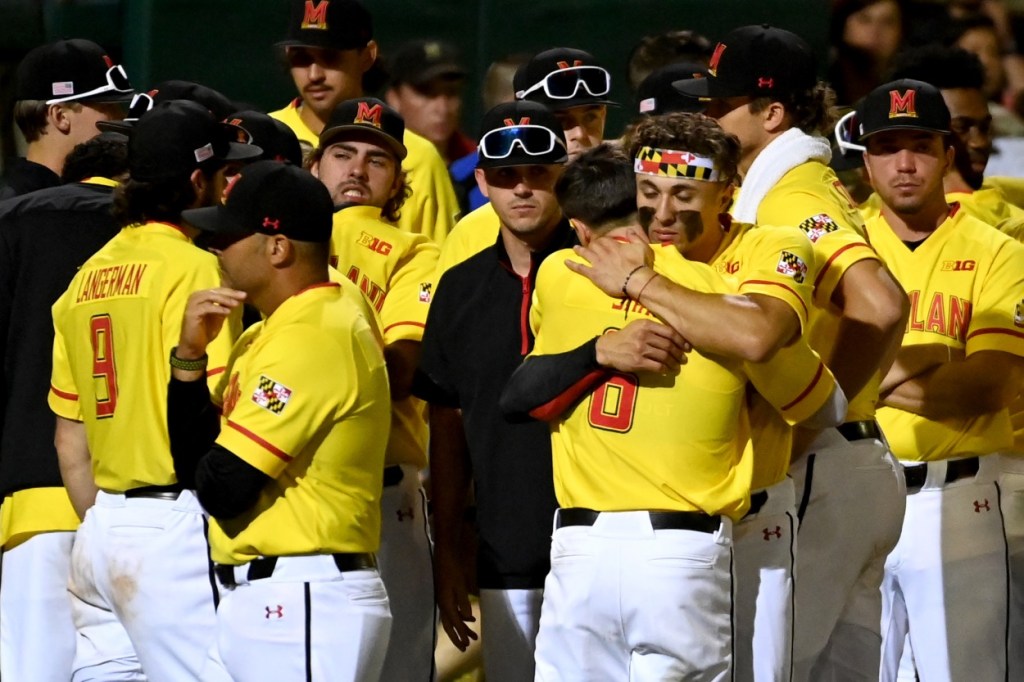 The Maryland Terps fell to the UConn Huskies 8-11 on Monday night in an elimination game of the College Park Regional. UConn now moves onto the Super Regionals while Maryland Baseball will be left fuming for months over one of the worst game-changing calls in recent memory.

In the top of the 8th inning, Maryland Baseball was trailing UConn 8-10. The Terps had a runner on 3rd base and only one out when center fielder Chris Alleyne hit a dribbler down the first base line.

This would’ve easily sent the runner home to score a run and get the game within 1 as the pitcher chased the ball down the first base line and tossed it to 1B for an easy out. Except the umpire then made the worst call in NCAA baseball history and called Interference on the runner.

The umpire called the runner out in the Maryland vs. UConn game. HOW!?

There is literally nowhere else for the runner to go. He has to run through the base. That is his job. Does the umpire think it’s a required pickle situation because that’s straight-up poppycock and hogwash?! Chris Alleyne’s only job here was to go full speed through the base.

Every sports fan has convinced themselves at some point that the refs are out to get their team because of blatantly bad calls. This happens a lot in professional sports when a ‘big market team’ is losing to a smaller market team (that’s better) and fans are convinced there’s some sort of conspiracy at play.

Let’s see what the fans are saying…

Apparently it's the Big Ten vs. NCAA umps today.

If the runner was in his lane, you have a case, but he wasn’t.

Gotta run in the box. That’s why its there.

if I was Maryland I would have simply not committed interference

This is the rule: “SECTION 51. The act of an offensive player, umpire or nongame person who interferes with; physically or verbally hinders; confuses; or impedes any fielder attempting to make a play.”

The number of people on Twitter arguing that the other side doesn’t know the rules and this was clearly interference is actually insane. Read the rule. Read it again. Then read it one more time…

Did the offensive player impede the fielder from making a play? No. He did not. He ran up the line and through the base. The UConn first baseman is crowding the base. There is no way the runner could’ve gone around him and avoided a collision.