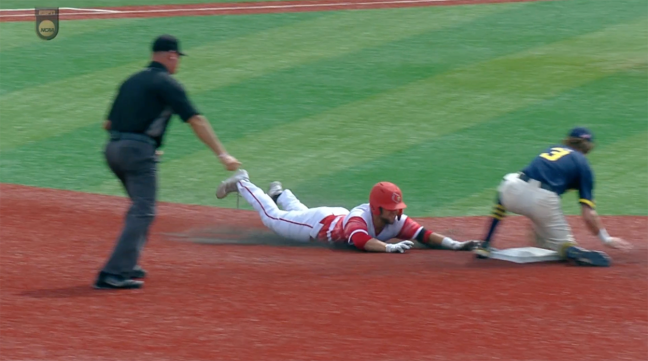 The Wolverines were screwed out of a crucial out in the late innings and it resulted in an offensive onslaught.

Michigan, which won the Big Ten tournament to make the postseason, was the three-seed in the Louisville Regional. They went 2-0 in their first two games, which sat them atop the winner’s bracket of the double-elimination format. Meanwhile, Louisville played its way into the Regional Final through the loser’s bracket.

As a result, the Wolverines needed to beat the Cardinals once in two opportunities to advance to a Super Regional. They lost the first game, which set up a Game 7 on Monday with the winner moving on.

And it was electric.

Both teams traded punches in the first 7.5 innings and Michigan took a 9-7 lead to the bottom half of the eighth.

That’s when things got questionable with a bad call between Michigan and Louisville.

With a runner on first and two outs, Louisville catcher Jack Payton knocked a deep fly ball off of the wall in left field. The runner on first reached third and Payton — who incorrectly bat-flipped thinking that he hit a home run — tried to leg out a double.

However, the Wolverines got the ball in and tried to tag Payton out at second. He was called safe on a bang-bang play, but the visitors did not agree.

WE HAVE CHAOS BUILDING IN LOUISVILLE pic.twitter.com/xesDx7B00X

In turn, the play went to review. And upon review, it looked pretty clear that the tag got in under the fingers of Payton (they visibly flicked up), which would mean that he was out.

The review. WOOOO that was close af. pic.twitter.com/vQr8CuBTVi

However, somehow, he was called safe upon review. It was a bad call.

From there, Louisville tied the game and the place went bonkers.

And on the very next at-bat, the Cardinals took an 11-9 lead that they would not give up on a two-run bomb.

Michigan lost and Louisville moved on to host a Super Regional. Now, there is a lot that goes into the loss. A lot of circumstances and things going differently could have ended with the same result.

But, with that being said, the Wolverines would have gotten out of the eighth inning if the review was called correctly. And that would have left the Cardinals to try and overcome at least a two-run deficit in the bottom of the ninth. Horrible way for Michigan’s season to end.