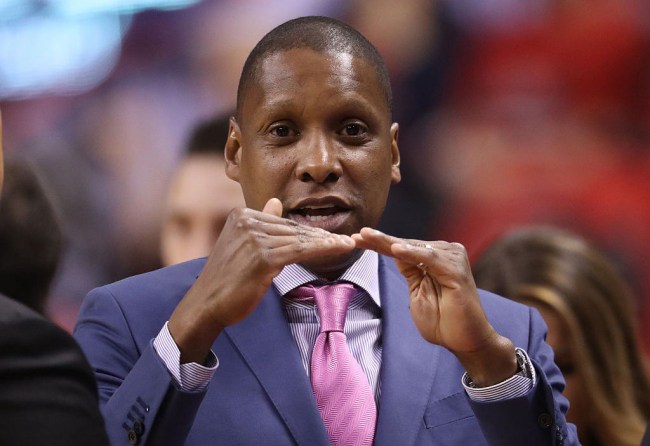 Last week, the Raptors took home their first championship in the history of the franchise on the Warriors home turf, which could only mean one thing.

Plenty of people flocked onto the court to rejoice in the victory but there was one person who was absent from the festivities at first: Marsa Uriji, the Raptors president of basketball operations who was denied from stepping onto the hardwood because he lacked the proper credentials to gain access.

While it was undoubtedly a frustrating moment for Uriji, the rejection wouldn’t really have been that much of a story if it wasn’t for the fact that the sheriff’s deputy who denied him access to the floor said he was slapped in the face by the executive after pulling a Black Knight from Monty Python and the Holy Grail and preventing him from passing.

Video of the incident soon began to circulate, and while it was clear some sort of altercation took place, there wasn’t any real evidence that Uriji struck the man in question.

However, the deputy maintains he suffered a concussion and a jaw injury as a result of the altercation, and while police say they have proof of the assault, things just got a little more interesting according to a report by The Globe and Mail.

According to the outlet, the Alameda County Sheriff’s Office says they have video evidence obtained from the arena to support the deputy’s claim (he was apparently equipped with a body cam that suspiciously stopped working right before the slap in question).

However, three eyewitnesses interviewed by The Globe who say they were within ten feet of the two men claim they never saw Uriji strike the officer in the face. Rather, they say the exec produced inadequate identification then shoved the deputy when he was rejected but that there’s no way the deputy suffered the injuries he claims to be nursing.

As of right now, police haven’t released the video they say they have in their possession so only time will tell how this ugly situation will ultimately play out.