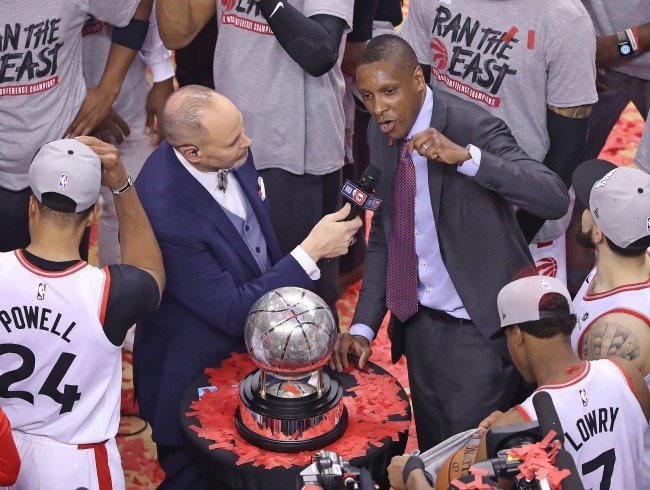 Who the hell do these GODDAMN NBA executives think they are? After Warriors minority owner Mark Stevens projected his failed high school basketball career on Kyle Lowry, Toronto Raptors President followed suit with an odd way to celebrate his franchise’s first ever NBA championship.

Ujiri was allegedly involved in a physical altercation with a deputy following Game 6 of the NBA Finals. The deputy told investigators he was trying to stop the Raptors president because he did not know who he was and he was not wearing the necessary credentials.

According to CBS, the deputy hired high-profile civil rights attorney David Mastagni and is considering filing a lawsuit against Ujiri.

“It’s an unprovoked significant hit to the jaw of the law enforcement officer,” said Mastagni.

“He has a serious concussion; a templar mandibular joint injury, which is a serious jaw injury,” he added.

The deputy, who was a 20-year veteran in the department, reportedly wasn’t able to return to work the following week due to his injuries.

Alameda County Sheriff Greg Ahern personally reviewed the the footage from the body camera of the deputy as well as Oracle Arena security cameras, and supports the deputy in his lawsuit. Ahern is recommending the case move to the district attorney for criminal charges of misdemeanor battery of a police.

For perspective, Mark Stevens was fined $500,000 and banned from attending any NBA games for a year. It will be interesting to see how this situation is resolved.