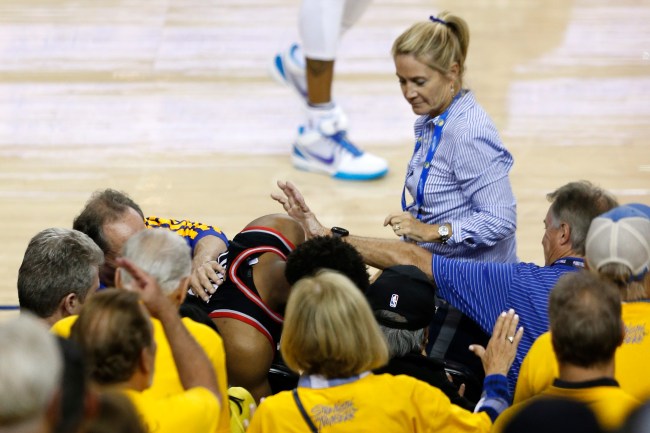 It has recently been revealed that the dink sitting courtside who pushed Kyle Lowry and allegedly said “vulgar words” to him is venture capitalist billionaire and Warriors minority owner Mark Stevens.

Stevens is a Harvard Business School-educated investor with an estimated net worth of $2.3 billion. The 58-year-old climbed as high as #10 on Forbes magazine’s Midas List of top 100 venture capitalists for his work with the famous Sequoia Capital, a venture capital firm that’s backed companies that now control $1.4 trillion of combined stock market value.

Honestly, what the fuck is this dude mad about?

Stevens was eventually kicked out of his prime seats, and today, the Warriors organization released a statement regarding the incident.

Mr. Stevens’ behavior last night did not reflect the high standards we hope to exemplify as an organization. We’re extremely disappointed in his actions and, along with Mr. Stevens, offer our since apology to Kyle Lowry and the Toronto Raptors organization for this unfortunate misconduct. There is no place for such interaction between fans–or anyone–and players at an NBA game.

Mr. Stevens will not be in attendance at any of the remaining game of the 2019 NBA Finals.

Review of this matter is ongoing.

I HATE when organizations say “review is ongoing,” when everyone saw everything there was to review. The sole purpose is to give the public the false perception that further punishment will be given down the road when the “review process” is complete. BOGUS.

If Mr. Stevens wants to get his NBA privileges back in 2020, he should be legally required to fight Kyle Lowry in an event that would be streamed by every major network in America. 12 rounds. 2 minutes a piece. Headgear required. Donate half the money from streaming revenue to victims of violence and the other half to me for this genius idea. Who’s got Adam Silver’s number?