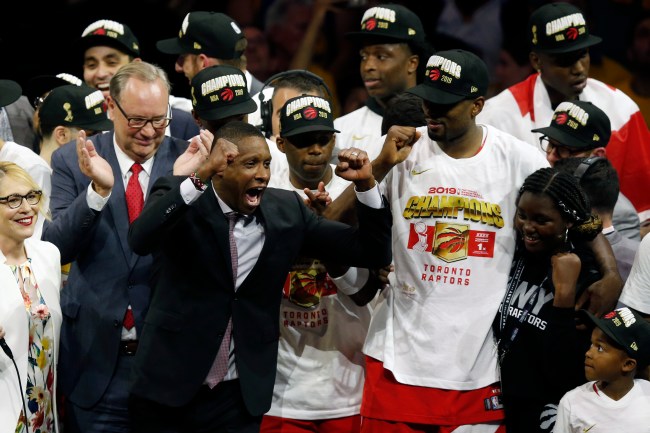 Raptors President Of Basketball of Operations Masai Ujiri apparently got into a physical altercation with a sheriff’s deputy at Oracle Arena after last night’s game.

According to a report NBC Bay Area, the Sheriff’s deputy was struck in the face by Ujiri, who was trying to get on the court to celebrate the team’s win.

A sheriff’s deputy was allegedly pushed and struck in the face by a Toronto Raptors executive who was trying to make his way to the court after Game 6 of the NBA Finals at Oracle Arena Thursday, the Alameda County Sheriff’s Office said.

The incident occurred moments after the Raptors defeated the Golden State Warriors to give Canada its first-ever NBA championship. Sheriff’s officials said the deputy denied the executive access to the court because he didn’t have proper credentials.

Witnesses on the scene tell NBC Bay Area the Raptors executive involved in the altercation is Masai Ujiri, the team’s president of basketball operations and former general manager.

The entire dispute happened because Ujiri was not wearing a credential.

“(The deputy) did not know who the man was and asked for the credential, and that’s when he tried to push past our deputy, and our deputy pushed him back, and there was another push that kind of moved up and struck our deputy in the face,” Kelly said. “At that point, several bystanders intervened and the executive did ultimately get back onto the court without displaying credentials.”

There is apparent video of the incident that confirms the account of the Sheriff’s deputy.

#EXCLUSIVE: #Raptors exec (believed to be Team President Masai Ujiri) involved in courtside altercation after the game. @ACSOSheriffs say he hit a deputy in the face. We're waiting response from @NBA. #NBAFinals https://t.co/iCIXWuPjqi

Alameda County Sheriff’s Office is investigatng the matter and determining whether or not to press charges against Ujiri.

Deputies are calling the incident a misdemeanor battery on an officer and they, along with the Oakland Police Department, are investigating the matter.

The executive is not in custody, but officers plan to hand the case to the district attorney, officials said.

The NBA has yet to comment on the matter.