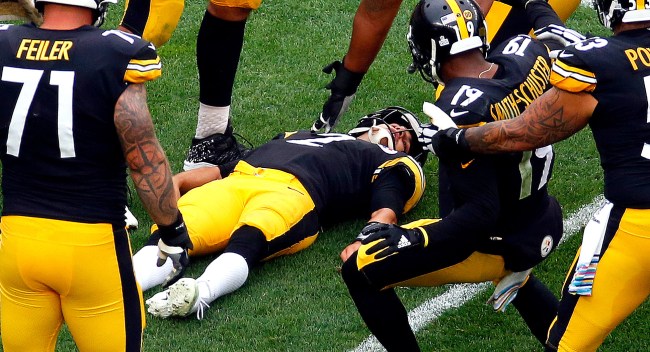 The scene was so grim that Steelers wide receiver JuJu Smith-Schuster was so distraught he almost inconsolable.

Rudolph’s head injury was made all the more worse when he was inexplicably forced to walk off field after getting knocked out because the stadium medical cart was broken.

The NFL later said Rudolph didn’t actually need a medical cart despite not being able to walk off the field under his own power, but anyone with who watched the scene unfold knows better.

On Monday, Rudolph spoke to the media about the play and the fact that he has no memory of the hit, reports ESPN.

He does remember walking off the field with the help of his linemen, and Monday, he laughed about the minor controversy surrounding the malfunctioning medical cart.

“When I was on the ground, they made me move my arms and legs and made sure I didn’t have any type of spinal cord injury,” Rudolph said. “I guess there were plenty of memes about the cart not working. I wouldn’t have needed to be in the cart because I passed all of the tests on the ground. I would’ve walked, regardless of whether the cart was operational or not.”

“It was a freak thing the way it hit my jaw,” Rudolph said. “My jaw was really never sore, the way that my head torqued really quick. The specialist said that it kind of shut off my brain, not my spinal cord, but my stem. Some high-ranking term that’s above my paygrade. It shut me off real quick.

“It was a sweet spot, shut me out black. Probably been hit like that many times and that’s never happened. It was a weird deal.”

Rudolph claimed he felt fine less than 24 hours after being knocked out, saying he had a minor headache that night, but “never really had any symptoms like sensitivity to light.”

This, of course, made him feel like he could have played on Sunday against the Los Angeles Chargers, but doctors felt that Rudolph was still too vulnerable.

“I think, I look back at this 10 years down the road and I’ll probably be smart, glad I did sit out for week but I was not happy in the moment,” he said.

Rudolph believes it was only the second concussion he’s had in his football career, the other coming in high school.