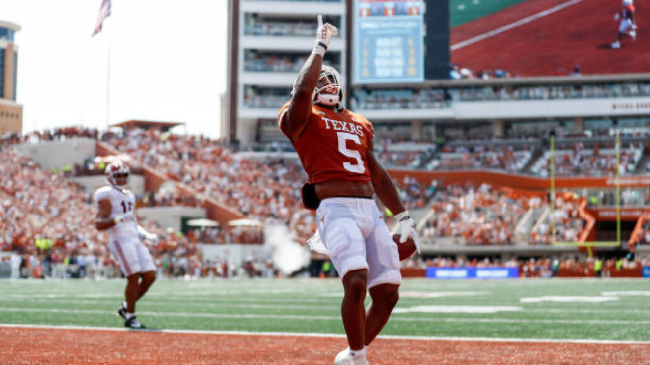 The University of Texas took part in the biggest game of the weekend in college football today. That game was also the biggest for the program in years.

The matchup lived up to that billing. Despite losing Quinn Ewers in the first half with a shoulder injury and their backup clearly dealing with a lower body injury, Texas took Alabama right down to the wire.

Now it has been revealed that they got a deserving turnout for the game. According to a report, the Longhorns drew a crowd of 105,213 fans for the matchup against the nation’s #1 team.

New attendance record at DKR today: 105,213. This crowd has been really impressive.

The fans who showed up for this one were rewarded with a game that was much more competitive than expected. The Longhorns entered the game hovering around a 3 touchdown underdog. You wouldn’t have known it watching the game.

Early on, it looked like Bama would roll, posting 10 points in the first quarter and finding plenty of success running the ball, but Texas completely stifled the Alabama offense from there.

They held the Tide scoreless in the 2nd and 3rd quarters, but their offense unfortunately couldn’t capitalize.

There was a moment where it looked like the Longhorns might have secured the win. They kicked a field goal with 1:29 left in the game to take a 19-17 lead. Unfortunately for Texas, Bama went the other way and kicked a field goal of their own for a 20-19 win.

While the outcome wasn’t what fans would have been hoping for, the Longhorns proved they can hang with the best teams in the country and a massive, raucous crowd that forced Bama into a ton of penalties clearly played a part in that.