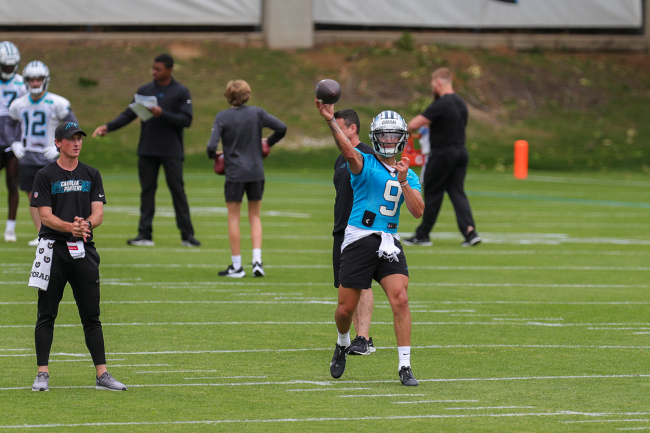 The Carolina Panthers have traded a lot of NFL Draft capital over the last two years for quarterbacks. As a result, the team has one of the deepest quarterback rooms in the league, with Baker Mayfield, Sam Darnold, P.J. Walker and Matt Corral.

As things currently stand, the starting job is wide open. Darnold and Mayfield, a pair of top-three picks from the 2018 draft, are the presumed frontrunners and both guys will have a shot to earn their place atop the depth chart.

That leaves Corral and Walker as the odd men out. It doesn’t mean that they couldn’t play their way into the starting role, but it’s unlikely. That’s not necessarily a bad thing. In fact, for the rookie gunslinger out of Ole Miss, it’s a good thing.

All three veteran quarterbacks are in the final year of their contracts. Corral is the only one of the four who is bound to the Panthers beyond 2022. The team was very high on their third-round pick and hopes that he is the future at the position.

By sitting behind Mayfield, Darnold and Walker this fall, it will allow him to be a sponge. He can learn the system, adjust to the speed of the NFL and get acclimated.

There is no immediate expectation to succeed as the starter for Corral. There is no pressure.

He is not going to declare 2022 a redshirt year for the rookie, but he sees the value in taking a year to learn as the young guy in the room.

“We’ll see how it goes, how it all plays out,” Fitterer said. “The one good thing for Matt, there is a transition for him from a college offense he was in to an NFL offense, especially a (Ben) McAdoo offense, where there’s a lot of verbiage. This will allow him the chance to really learn at his own pace, learn from a couple of veterans in that room in Sam and Baker, and having PJ in that room as well.

“And when it’s time for him to get out there and play, he can get out there and earn that job if he’s ready. But it’s going to be on him to learn and play well when he gets there. Right now, our focus is to get all of our quarterbacks up to speed so we can play good quality football at that position.”

Competitive pride aside — Corral is a known competitor who will always go to war for his guys — sitting a season could be the best situation for the Lane Kiffin offense product. Rookie quarterbacks are rushed onto the field too often in today’s game without the chance to develop.

It is a luxury for Corral to be able to sit, but that isn’t to say that he couldn’t earn an opportunity to see the field in some capacity this year. He can sling it and he most certainly has that dog in him.