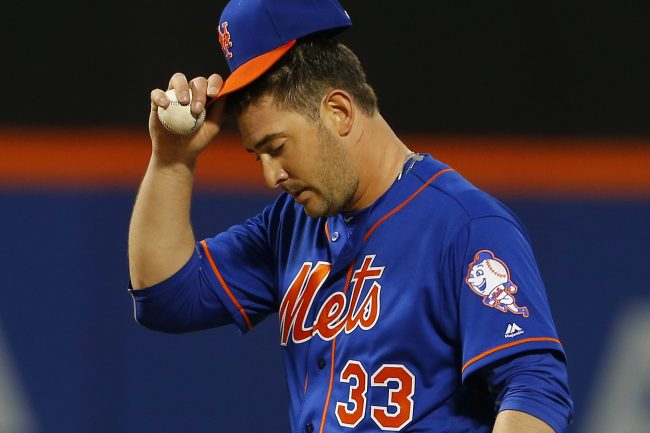 Kay is charged for playing a role in the 2019 death of Angels pitcher Tyler Skaggs—who overdosed on a mix of alcohol, fentanyl, and oxycodone, as provided by witnesses from the Tarrant County Medical Examiner’s office who testified in the federal case last week.

The defense team is trying to prove that Skaggs could have received opioids from multiple sources, thus making it difficult to assume Kay is responsible for providing Skaggs with the drugs that led to his death.

Matt Harvey is one of those individuals who alleged to have possibly provided Skaggs with drugs on a regular occasion, which would help achieve what Kay’s defense team is trying to accomplish.

At one point in his opening, Harvey mentioned the quote, “I’m here because I got subpoenaed by the government to be here.”

Harvey has been given immunity, as reported by multiple sources.

Matt Harvey: “I’m here because I got subpoenaed by the government to be here.”

He said he’s received a compulsion order for him to testify. He has been given immunity.

Matt Harvey now on the stand. Says he was subpoenaed and would have invoked the 5th if he hadn't been given immunity. He has to ask anything he's asked.

There are a number of journalists providing excellent reporting on the case, one of which is Sam Blum, the Angels beat reporter for The Athletic, and the other T.J. Quinn of ESPN.

Matt Harvey Admitting to Cocaine Use and Opioid Use

Harvey revealed a lot about his drug use and how it intertwined in his friendship with Tyler Skaggs.

Harvey: Skaggs asked him for pills before a couple of road trips in June '19. Including one where he said he wanted oxy to feel "loosey goosey" before a start.

Harvey says he shared Percocets with Skaggs. "He had asked me… if I had anything and I think I said I had" either Percocet or oxy at the time.

Harvey said he often limited drinking while on oxycodone. He knew it was dangerous, especially on heavy drinking.

Defense has already tried to establish possibility Skaggs was heavily drinking and taking oxycodone. Potential cause of death instead of fentanyl.

Not only did Harvey talk about drug use with Skaggs, but Harvey also mentioned his drug use in general during the time he was playing.

Harvey says he was a partier. Prosecutor asks, what did you party with? Harvey: "Cocaine."

Defense Attorney: “Pretty much the understatement of the day that you don’t want to be here today?”

During cross examination, Harvey also acknowledges that his social life could have negatively impacted his playing career.

Alleged Drug Use at Angel Stadium

What is alarming is Harvey also mentions several times about using drugs on the premises of Angel Stadium.

Harvey also said that he and Skaggs did oxycodone at Angel Stadium previously. In clubhouse and dugout.

Harvey says he used in clubhouse and dugout. Skaggs told him he crushed and snorted oxy on the toilet paper dispenser in the clubhouse bathroom.

Matt Harvey and C.J. Cron Admit to Getting Pills from Eric Kay

Colorado Rockies first basemen C.J. Cron was also called to the stand as a witness. Cron played for the Angels from 2014-2017. According to Sam Blum, the prosecution is trying to establish Cron received oxycodone from either Kay or Skaggs, which would thus connect back to Kay.

Cron said he received pills from Kay 8 times. Called it a “dumb decision.”

He also got the pills an additional time from Kay, when the Rays came to play the Angels in the 2018. Cron was on the Rays.

He said he had no oxycodone source on the Rays.

Cron said he received pills from Kay 8 times. Called it a “dumb decision.”

He also got the pills an additional time from Kay, when the Rays came to play the Angels in the 2018. Cron was on the Rays.

He said he had no oxycodone source on the Rays.

AUSA Beran: "At any point during your time with the LA Angels did you learn of anyone taking oxycodone pills?"
Cron: "I just learned that Skaggs was taking them, and in conversations with him."
Beran: "Where did he get them?"
Cron: "Eric Kay"

And here’s what Harvey said about Eric Kay.

Harvey said he spoke with Eric Kay on June 30, 2019, about getting a blue oxycodone pill. Harvey said he asked Kay to put in his locker.

He said he chose not to take the pill.

He woke up the next day to find out Skaggs was dead.

He then threw the blue pill away.

Revelations from the Case So Far

This case is going on in real-time as we speak, so more news might come of it as the day goes on.

And as for Matt Harvey, he has revealed quite a bit about his drug use during his prime years of pitching.

These are some pretty ugly acts. One can only feel sadness towards Skagg’s death and the details that are unraveling.