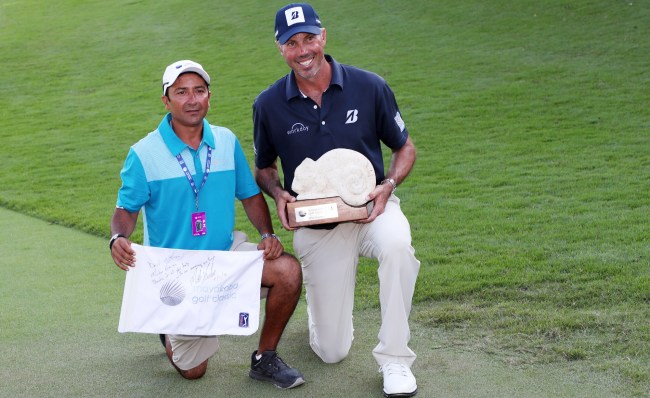 Nine-time PGA Tour winner Matt Kuchar has been under the spotlight this week for basically stiffing his caddie after taking home a winner’s check of $1,296,000 at the Mayakoba Classic last November.

Now, there is no set fee local caddies charge to carry the bag for a pro, but bonus payments are usually anywhere between five and 10 percent of whatever the pro wins.

He didn’t get anywhere near either of those amounts from Kuchar.

Ortiz said that Kuchar said at the start of the tournament that he would be paid $3,000 for the week, plus an unspecified percentage of his winnings.

On that basis, in the euphoria of victory, Ortiz had hoped to make as much as $130,000. When Kuchar left Mexico, the caddie said, he was under the impression that he would still receive a bonus.

By Sunday night of the tournament, Kuchar’s smiling face was sunburned and covered in stubble. He and Ortiz posed for pictures together with the winner’s trophy. Later, Ortiz said the golfer handed him an envelope with his payment in cash in it and said, ”There you go. Thank you. Bye.”

Now, Kuchar is trying to defend the tip, and he’s pretty much just making the hole he’s in even deeper with comments he’s made to media outlets like The Golf Channel.

According to Kuchar, they originally agreed to a bonus structure that would have allowed Ortiz to make up to $4,000 for the week.

“I ended up paying him $5,000 and I thought that was more than what we agreed upon,” Kuchar said. “I kind of think, if he had the chance to do it over again, same exact deal, that he’d say yes again.”

Matt Kuchar shares his side of the El Tucan saga, @AlexPerryNCG explains.https://t.co/DJHpDbyNDF

Kuchar, who has won over $47 million in his career, also said that after the controversy bubbled up his agency Excel Sports Management offered to pay El Tucan an additional $15,000 – cranking the caddie’s tip percentage all the way up to 1.5%.

Ortiz rejected the offer saying he felt a $50,000 payment would have been more appropriate.

After all the hubub, Kuchar still doesn’t get it, however.