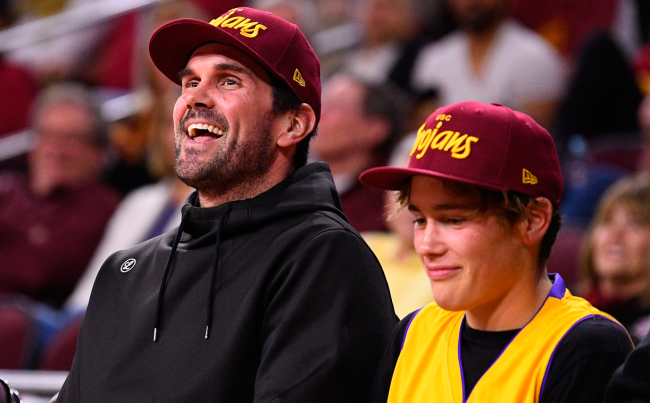 Much like Arch Manning, 15-year-old Cole Leinart has a family pedigree that gets people in the world of football’s attention despite his young age.

The son of former NFL quarterback and 2004 Heisman Trophy winner Matt Leinart, Cole Leinart is still only in eighth grade, but much like Manning was at that age, he’s already getting heavy looks from major Division I college football programs.

Cole, a two-sport star who is set to play at Mater Dei High School in Santa Ana, California (just like his dad did) next season, is also pretty impressive on the basketball court. After all, his mom, Brynn Cameron was a pretty good guard for USC back in the day.

That sport, however, is not where he is expected to play in college, especially since Col just announced that he has already received three scholarship offers from some pretty heady college football programs including SMU, Arizona and Utah.

I am grateful to announce that I have received my 2nd D1 offer from @ArizonaFBall. Thanks to @brennanpcarroll and the entire staff. #Pac12 #BearDown pic.twitter.com/1DpiILUmuG

Arizona offensive coordinator Brennan Carroll was an assistant at USC for part of Matt Leinart’s college career while his dad Pete was the head coach.

Honored to receive an offer from @Utah_Football! Thank you @FWhittinghamJr and the entire staff. Go Utes! pic.twitter.com/PotYXjYKmN

Technically, those weren’t the “first” college football scholarship offers Cole Leinart has received from a coach. Back when he was just 11 years-old, Lane Kiffin said he had made Cole an offer to come to Florida Atlantic.

One has to guess that offer still stands now that Kiffin, who was on the coaching staff at USC when Cole’s dad Matt was a two-time first team All-American there, has moved on to Ole Miss.

College football fans, upon seeing Leinart’s scholarship tweets, were quick to jump on his bandwagon.

If he ever become a 4 or 5 stars recruit, he'll go to USC. Sorry to burst your bubble Zona fans!

It would probably be a major upset if he didn’t.