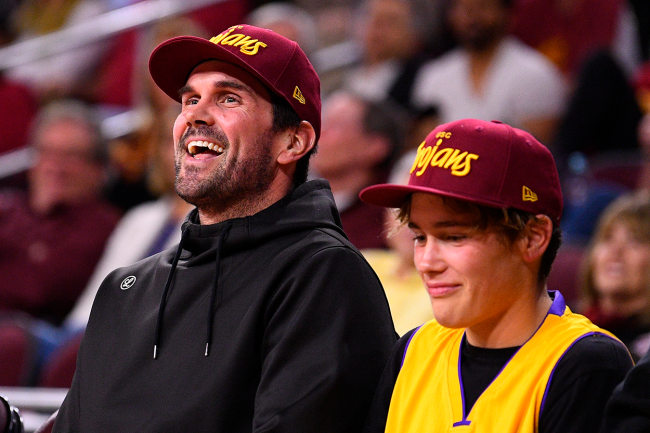 Cole Leinart may only be 15 years old, but he is already tearing it up as a two-sport athlete. Cole, the son of former USC and NFL quarterback Matt Leinart, is set to be one of the top quarterback prospects in the Class of 2026, should he not choose to ball out on the hardwood instead.

As the son of Matt, Cole knows how to sling the pill. His dad has even said before that he is “way faster” and “more athletic” than he ever was.

While Matt was more of a traditional pocket passer, Cole has some serious wheels.

And he has an absolute laser for an arm, especially for an eighth-grader.

Even while on the move.

Cole’s talent as a quarterback is undeniable. He is going to be very, very good and certainly be will be one of the most highly-coveted recruits in his class.

However, should he choose to go another route, Cole could be just as successful on the hardwood. His mother, Brynn Cameron, was a formidable perimeter threat during her five-year career as a guard at USC.

She entered her senior season as the Trojans’ No. 3 all-time three-point shooter and was ranked No. 5 all-time with a 34.5% three-point shooting percentage at the time. It appears as though her stroke was passed down to her son.

Cole and Elijah Williams, the son of former NBA guard and current head coach of the Phoenix Suns Monty Williams, are on the same team this spring and they are nearly impossible to stop.

Cole’s parents’ size has helped him get up and throw down for the first time as an eighth-grader earlier this year. That’s crazy.

Whatever Cole ends up doing — whether it is basketball or football — he is well on his way to being elite. He will presumably follow in his father’s footsteps, although he is a righty and Matt is a lefty, but with his size and athleticism, it’s nearly impossible to fail.

Cole will finish up middle school in the spring and then is set to play at Mater Dei High School in Santa Ana just like his father. From there, if it were up to Matt, he would be QB1 at USC.