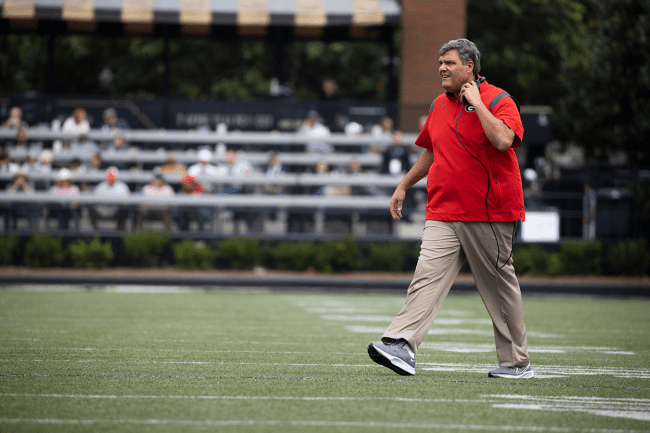 Georgia football announced that offensive line coach Matt Luke was stepping down from his position on February 22nd. The announcement came nearly two months after the Bulldogs won a national championship and it came as quite the shock.

“Today, after much prayer and conversation with my family, I have decided to step away from coaching and shift my focus to spending more time with my family,” Luke said in a statement.

Fortunately, it does not seem like there are any pressing health issues or wellness concerns that cause Luke to resign. He just needs a break.

On a recent episode of Rusty Mansell’s Junkyard Dawgcast Podcast, Luke, who is beloved by current and former players, coaches and fans alike explained why he is choosing to take some time away from the gridiron.

“There’s a lot of fear, nervousness about it, because you’ve never done anything else,” he said. “But I didn’t want to have any regrets. My oldest son’s 14, my youngest one’s 10, and I didn’t want to have any regrets about seeing them grow up and being there. I’ve been blessed and fortunate in my career, and to be able to go out and win a national championship. I told Kirby (Smart) I’d help him win one, it just happened a little faster than I thought.”

EXCLUSIVE Interview today at Noon with Matt Luke. He talks about his decision to step away as a coach, what makes Kirby Smart different and much more. Tune in @Dawgs247 to catch this special Junkyard Dawgcast pod.. @Dawgs247 @247Sports pic.twitter.com/XrEwavEpu1

First and foremost, Luke’s decision is his own. No matter why he chose to step away, it is prerogative to do so and — between his buyout from Ole Miss and his salary at Georgia — he is more than financially stable.

However, for him to make this decision amidst the current climate of college football makes a lot of sense. It is very hard to be a football coach in today’s era of the collegiate game.

Arizona Cardinals head coach Kliff Kingsbury, who has previously coached on the NCAA level, recently said that he would rather do “anything” other than go back to coaching college football. The reason is simple.

In the NFL, once the season is over, the offseason allows coaches to take a real break from the game until the next season begins. Sure, there is the NFL Combine and NFL Draft, but it isn’t a constant, 24/7 job.

That is not the case on the collegiate level. Especially not with the importance that is placed on social media in today’s society, especially with today’s youth.

As a college football coach, when the season ends, the offseason begins. But the offseason can actually be more demanding than the actual season.

Recruiting is year round, the transfer portal adds a new element of around-the-clock work, and spring practice fills at least four weeks of March/April/May. College coaches never get a break.

Just ask Gary Patterson, Brian Kelly and Dabo Swinney, who have all gone viral for the wrong reasons during the current recruiting cycle. It’s exhausting.

Luke is 45 years old and has been coaching since he was 22. And prior to his first job as a grad assistant in 1999, he was a player.

Luke’s entire life has been football. With a national championship ring under his belt, plenty of money still coming in from Ole Miss and Georgia, and a family at home with two boys who are entering their formative years, he needs to breathe. He needs to be present.

There is no denying that Luke’s decision says a lot about the current state of the sport. Can you blame him?