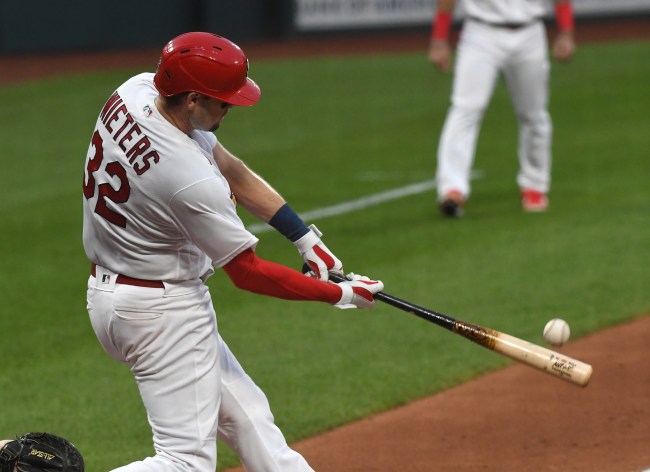 St. Louis Cardinals catcher Matt Wieters battled Twins reliever Caleb Thielbar in the 3rd inning of Tuesday’s game for one of the longest at-bats in MLB history. When it was all said and done, the 19 pitches it took to get Wieters off the plate was the third-longest at-bat in MLB history.

Major League Baseball catches a lot of flack for pace of play and how long games last which makes this more interesting to me. Somehow the length of this at-bat is the draw. We love to see it go on and on forever. The suspense is what keeps us going. Kind of like the 22-inning game between the Rockies and Padres back in 2008 where you couldn’t turn off the TV because you had to see how it would end.

The bases were loaded with two outs and neither the batter nor pitcher was willing to go quietly. Eventually, the pitcher got Matt Wieters to fly out to the Center Field warning track and the Cardinals went on to win the game 6-4, this was the second game of a double-header where the Twins took the first game 7-3.

There have been 5,400 instances this season of a player having at least 4 PA in a game and seeing fewer pitches than that — total!

Here’s this grueling at-bat, one of the longest you’ll ever see in Major League Baseball:

Look at this heat map of pitches. All of this for a single at-bat. Pure insanity.

Credit to Matt Wieters for fouling everything off in a 19-pitch at-bat (!!), but even more credit to Caleb Thielbar for throwing 10 consecutive 3-2 pitches in the strike zone with the bases loaded. Thielbar wins the battle to escape the jam. pic.twitter.com/IQAjgPJeVc

In a completely unrelated note, Matt Wieters and I each dated the same girl way back in the day (not at the same time) and I’ve been told I’m the superior man at various tasks. Does that mean I could work a 20-pitch at-bat and then hit a dinger? Possibly.

Here are some stats on this at-bat from an article on MLB.com:

The 19-pitch plate appearance was the most pitches to a Cardinals batter since pitch counts have been tracked (1988). The most prior was 17 pitches seen by Rick Ankiel on April 16, 2008, which ended in a walk. It was the longest plate appearance for any Twins pitcher going back to 1988; the most prior was when Brad Radke threw 17 pitches to Seattle’s Darren Bragg on June 16, 1995. Bragg ended the at-bat with a single.

Wieters’ plate appearance was also the most pitches seen by any player in a bases-loaded plate appearance since pitch counts have been tracked (1988), according to MLB.com’s Sarah Langs. The prior high was 15 four times.

The 19 pitches were two pitches away from tying the Giants’ Brandon Belt’s 21-pitch at-bat against Angels pitcher Jaime Barria on April 22, 2018. The 21 pitches in that at-bat, which lasted about 13 minutes, were the most on record (since 1988) for a single trip to the plate. (via)

I haven’t actually watched baseball in a few days because my TV provider, Frontier, dropped my local Fox Sports Sun affiliate (they dropped all regional Fox Sports channels) and I’m no longer able to watch the Tampa Bay Rays on TV without switching providers. The Rays have one of the strongest TV viewerships and they’re in first place in the American League but apparently none of that mattered to Frontier who is about to lose most if not all of their customers who are sports fans in Southwest Florida.