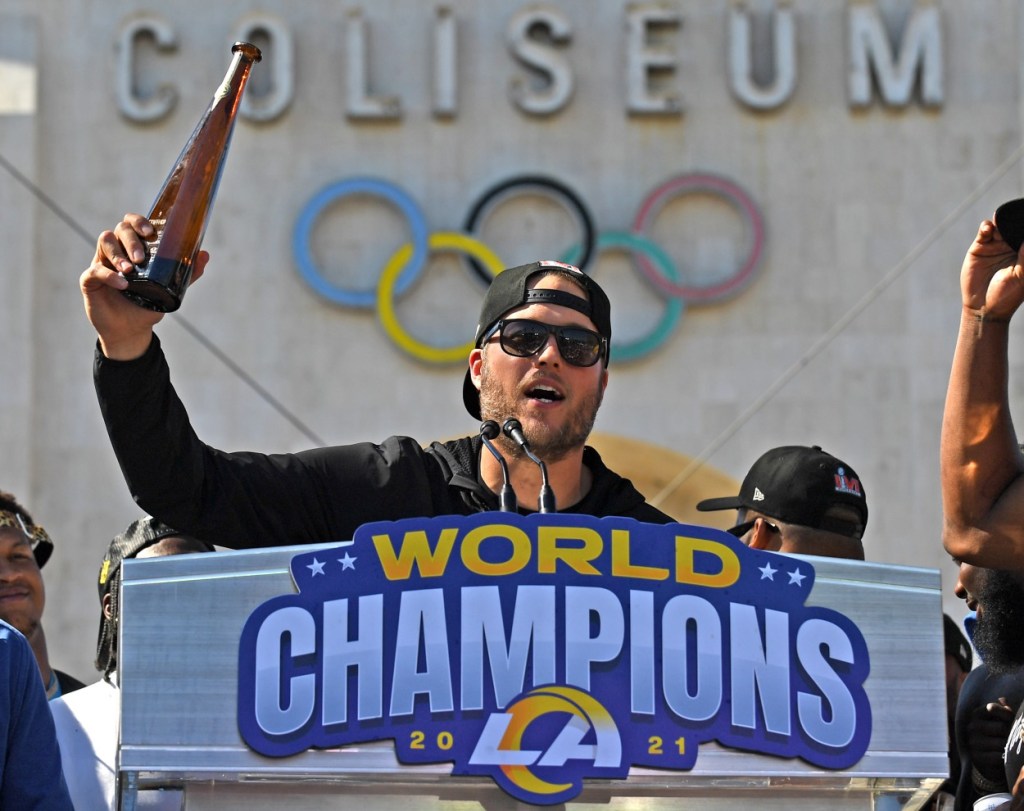 Later that day they would go to Disneyland where Matthew would ride on a float in the parade while Kelly Stafford took care of the kids while battling a monumental hangover. Then came the epic Super Bowl parade followed by Matthew and Kelly Stafford heading to Las Vegas for four days (five?) which is WAYYYY too much time in Vegas.

Below, Matt and Kelly share their stories of partying over the past week including Matthew drinking Don Julio 1942 Tequila straight from the bottle and flipping on a non-existent Southern accent. And all of that started in the most State School way possible: packing their own raodies for the Super Bowl parade. I’ve broken out three of the major stories below, including Matthew and Kelly Stafford discussing the photographer who fell and fractured her spine.

Kelly Stafford: we talked about it on the last podcast, when will it hit you that you won a Super Bowl? Do you think at that parade it hit you?

Matthew: Yeah, I think so. That was kind of the first time our team was back together after the game.

Kelly: You said even after the game everyone is getting pulled by media and family and y’all don’t really get a chance as a team to celebrate.

Matthew: We had an exit meeting and Sean did a quick team meeting before that but even before and after that guys are kind of cleaning out their lockers and checking around. But it’s not all of us in one place at one time so it’s good to get that chance again on Parade Day which was pretty sweet.

Kelly: So the parade happens. What a time. I look at Matthew and I’m like ‘we need to pack a cooler. I don’t know, we’ve never done this before. Is there going to be alcohol? I’m sure there’s going to be some type of alcohol. But let’s make sure we bring our own alcohol.’

One thing we were missing in that cooler was Sunny Vodka which was a little devastating when we showed up and realized we didn’t have that. But we’re carrying that (cooler) on the bus and the energy from all the guys is pretty awesome.

Side note: send someone out to get it! Matt just won the Rams a Super Bowl, surely someone will run out and bring back Sunny Vodka. Or send out a tweet or Instagram request and it would be there in half a second.

Kelly: I thought it was going to be the guys on one bus and the families on the other. It turns out we were all mixed. And we did get to have the Lombardi Trophy on our bus which was really cool.

Matthew: It was cool. We had a really good mix on our bus. We had Stan and Josh Kroenke, Sean McVay, A.D., Coop. It was a fun group. You don’t always get to hang out with your owners and coaches. So it was cool to get to do that with those guys and celebrate it together and see all of the LA Rams faithout out there together cheering for us.

Kelly Stafford Calls Matthew Out On His Non-Existent Southern Accent

Kelly: So obviously beers were given to everybody. Our bus was loaded from the cooler and as you guys all know, Matthew had a bottle of Don Julio 1942 basically to himself. Which, we’ll talk about, but we’ve been in Vegas for four days so even the mention of alcohol is kind of tough. I don’t think the Don Julio has been touched since we’ve been in Vegas.

Kelly: From my point of view, I have never been happier for Matthew just enjoying all the work he has put in, just taking the moment and thinking this is the moment that I’ve worked my whole life for. There’s multiple moments this season that I will remember but you (Matthew) on that parade bus. And I know, he’s like ‘I got too drunk’ and I’m like ‘you know what? You got the perfect amount of drunk.’

You the drunk that people don’t get to see some sides of your personalities. You’re funny. You’re laidback. A lot of people see the buttoned-up and perfect, the one that never messes up.

So the parade happens and I again did not know this happened. The whole podium at the end. I found myself hanging in the back. And I hear you for a hot second. I hear the y’all and I hear the southern hospitality and I was ‘what is happening right now?’

This man, he is from The South. And he might have a ‘y’all’ (in him) but there’s no Southern Drawl to my husband I guess unless 1942 is involved.

Matthew Stafford: Yup, unexpected but it happened. I was just pumped. I was pumped to be there. Thinking back on it there are so many sacrifices that all of our guys have to make during a football season to get to that point and to be able to just go let it rip with those guys and not have a care in the world and just go have fun is a cool experience. Seeing all of those guys having fun in a way that you don’t normally get to see in a season or during the offseason.

Everyone’s on Cloud Nine at that point and I said ‘y’all’ early in the speech and realized they might be thinking this guy is a Southern Country Guy or something so I just laid it on thick and went for it and I felt pretty good about it.

Kelly Stafford: the ‘preciate ya’ at the end. There was no ‘a’ in ‘appreciate ya’ and when you took that sip of Don Julio I feel like your teammates have never seen you that way and they were so excited that you let loose because it’s rare to see.

Kelly: We can’t not talk about what happened and we’re going to talk about it very quickly.

There was a photographer who stepped off the back of the stage. They had asked if wanted a picture and I was like ‘yes’ because looking back at my camera roll I have literally zero (pictures) of Matthew and I. And when she offered, she stepped back and fell. It was an awful, awful moment. Matthew looked at me and said ‘check her please, and turned around’.

I went straight to her and I could see that she was okay. Kind of stayed there and went and got some help. Long story short, we followed up with her the moment we got in the car. Matthew looked at me and said ‘hey, will you contact her with the Rams and see how she’s doing.’

They did that. We think she’s going to be okay. Next day we wake up, not okay. Matthew actually texted her himself. And that’s kind of where the story ended. But I do know that the reaction. thatthe world saw, in that split second. That’s not what you (Matthew) wished was your reaction.

Matthew: That obviously happened really quickly and suddenly and unexpectedly and I wish I had a better reaction in the moment. I didn’t. I apologized to her for that. But I’m glad that all in all she’s doing alright.

Disneyland, Not Always The Happiest Place On Earth

Kelly: I feel like I still have yet to gain any part of my voice back. I don’t know if this is part of the Super Bowl win, or the Super Bowl parade, or us at the Craps table. I tend to always scream I guess.

We are currently in Vegas, been here since Thursday.

Kelly: that is a long time in Vegas, y’all, and I know whoever’s been here knows it. It’s been an incredible time.

The day after the Super Bowl we did that podcast and then we told y’all we were going to Disney(land).

Kelly: Disney is a beautiful, amazing place when you are sober. When you are hungover and when you are still a little tipsy, not so much. If you didn’t have kids, maybe it would be a little more fun.

Matthew: Yeah, it was a tough day.

Kelly Stafford: Again, we’ve spent four days in Vegas (this is their 5th), we’re struggling a bit here. But we go to Disney and are kids are SO excited. Obviously, they’ve had 12 hours of sleep but Matthew and I are working on 1 (hour of sleep). We get there and immediately you have to put on your perfect face and you have to be happy and not hungover. And we bought a few friends with us to help us out with the kids.

They (Disney) look at us and they’re like ‘you guys have the kids, we’re taking Matthew to do media and the parade’ and I’m like ‘oh no, what is this about to entail.

I ask the kids ‘what rides do you want to go on?’ and I’m like ‘please no circle rides.’ My brain on circle rides still is a problem, the whole ‘finding my balance’, then you add alcohol and add juggling 3 kids and the only thing I want to do at this point is jump back on the wagon. I hate to say that but I was feeling that hungover. Or go to bed. And those were two options that weren’t options because there’s no alcohol at Disneyland.

So I put my big boy pants on and we start riding these rides. I start feeling like I’m going to throw up all over these little kids on this ride behind us. Meanwhile, I’m getting pictures sent to me of Matthew living his best life on a parade float with confetti and all the fun things. And I’m sweating trying to wrangle all of my children. All they want to do is go on on more rides, more rides, more rides. Y’all, it was not the happiest place on earth that day. It is every other day. But that day it was absolutely not.

All of those stories take you through bout the first 20 plus minutes of the latest episode. If you want to hear the rest, you can check it out here on Apple’s Podcasts or search for it wherever else you get your podcasts.