Matthew McConaughey And His Bongo Drum Had 20,000 Austin FC Fans ROCKING Before The Club’s Home Opener 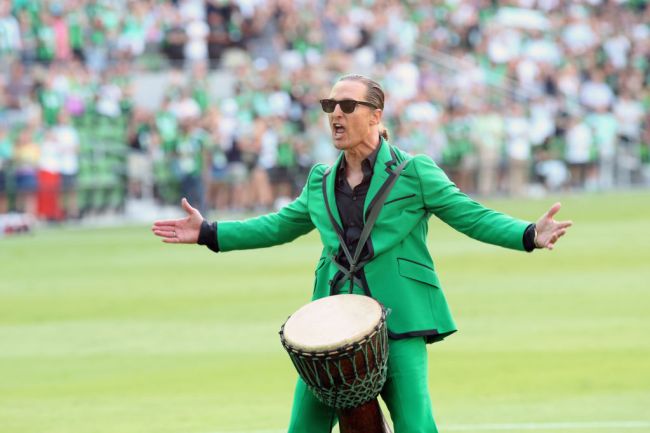 Matthew McConaughey is the ultimate hype man and he always brings the party to Austin FC. As a minority owner in Major League Soccer’s newest club, the 51-year-old Texas-native has been heavily involved in promotion and fan experience. About a month prior to the club’s first home game, McConaughey led the supporters in a practice run of their chants for the season.

The club, which was founded in 2018, is competing in its inaugural season on the MLS level and played its home opener at a brand-new, multi-million dollar stadium on Saturday. Prior to the match the supporters unveiled a banner honoring Willie Nelson, Stevie Ray Vaughan, Raul Salinas and other Austin legends.

The sold-out crowd was absolutely rocking all night.

Of course, McConaughey was in attendance and rolled up wearing an epic green suit.

Not only was he dressed for the occasion, but he was prepared. Minutes before kickoff, McConaughey strapped on a bongo drum and got the crowd fired up.

The club’s slogan and most prominent chant is a call-and-response. The crowd is prompted with “VERDE!” to which it replies, “LISTOS!” Meaning in english, “GREEN! READY!”

McConaughey stopped by the club’s training facility last week and gave the players a motivational speech. Before he left the pitch, he broke it down with a “Verde! Listos!”

Austin FC’s Q2 stadium holds more than 20,000 at full capacity and cost nearly a quarter of a billion dollars to build. It is considered one of the premier venues in the MLS. Saturday’s opener shows what a tremendous culture and experience is being built in Texas’ capital city— backed always by McConaughey.

He narrated a hype video for the club and it’s epic.