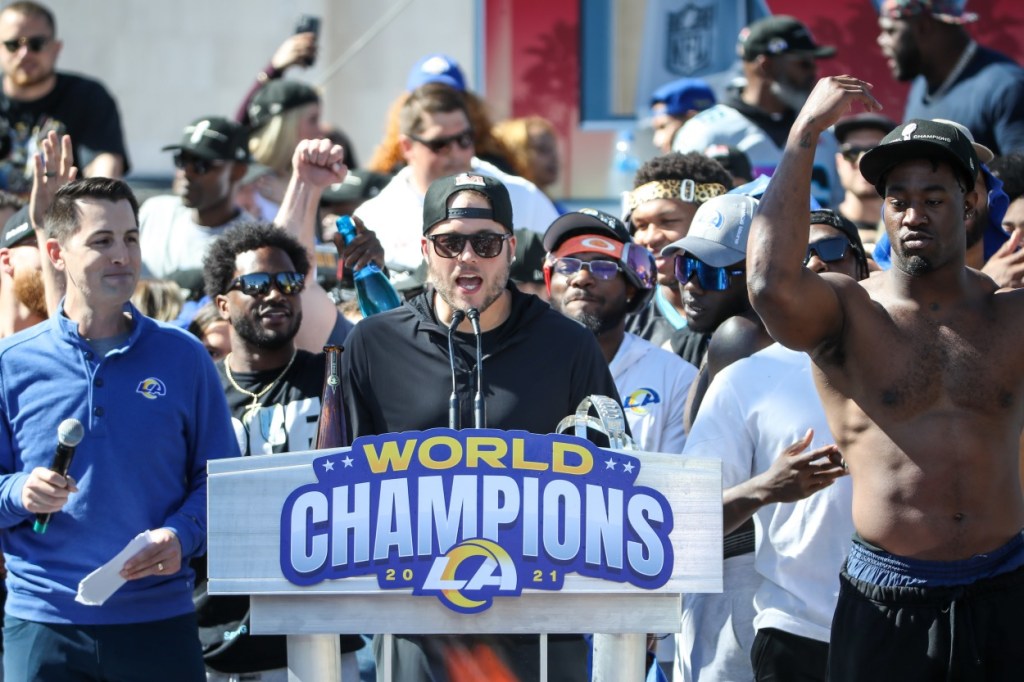 The Los Angeles Rams Super Bowl Championship parade was an overall success for sure. Both the players and fans seemed to have a great time. Head coach Sean McVay and Aaron Donald seemed to affirm their desire to return and run it back next season. But then there was the Matthew Stafford x Photographer incident that cast a dark shadow over the event.

Then the photographer stepped backward to get the shot and fell off the stage and fractured her spine in the process. Matthew Stafford’s reaction went viral as he peace’d his way out of there as fast as possible.

On this week’s episode of The morning after with Kelly Stafford podcast, Kelly and Matthew Stafford discuss the incident. They stop short of discussing the part where photographer later deleted her Twitter account after racist tweets using the n-word were discovered, and this happened after Matthew and the Rams agreed to pay for the woman’s medical bills. But here’s what Matthew and Kelly had to say about the incident.

KellyStafford: “We can’t not talk about what happened and we’re going to talk about it very quickly.

There was a photographer who stepped off the back of the stage. They had asked if wanted a picture and I was like ‘yes’ because looking back at my camera roll I have literally zero (pictures) of Matthew and I. And when she offered, she stepped back and fell. It was an awful, awful moment. Matthew looked at me and said ‘check her please, and turned around’.

I went straight to her and I could see that she was okay. Kind of stayed there and went and got some help. Long story short, we followed up with her the moment we got in the car. Matthew looked at me and said ‘hey, will you contact her with the Rams and see how she’s doing.’

They did that. We think she’s going to be okay. Next day we wake up, not okay. Matthew actually texted her himself. And that’s kind of where the story ended. But I do know that the reaction. thatthe world saw, in that split second. That’s not what you (Matthew) wished was your reaction.”

Matthew Stafford: “That obviously happened really quickly and suddenly and unexpectedly and I wish I had a better reaction in the moment. I didn’t. I apologized to her for that. But I’m glad that all in all she’s doing alright.”

Here’s footage of the photographer falling in Matthew’s reaction, ICYMI

Stafford watched her fall off the face of the earth then just turned around and “mixed in a water”😭😭 pic.twitter.com/NWOJXQTvqH

It’s odd that they stop short and don’t address the aftermath. But I also wouldn’t really expect them to talk any further on the incident than this. It would be great if they did elaborate further but I just don’t expect to hear anything more about it from the Staffords.

Kelly and Matthew Stafford also discussed Matt’s inexplicable Southern accent that showed up after he drank tequila and how hungover they were at Disneyland. You can read a full rundown of all that right here in my article from yesterday.