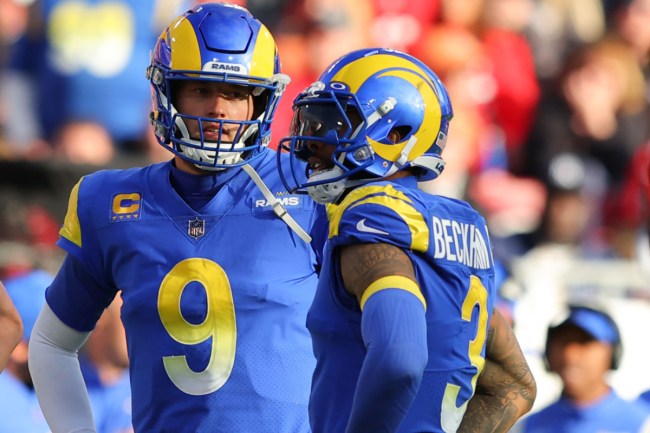 Still recovering from the torn ACL he suffered in the Super Bowl, Odell Beckham Jr. is currently a free agent. He likely won’t be available for the start of the upcoming NFL season, but a team will surely sign him sooner rather than later.

Matthew Stafford is hoping that team is the Los Angeles Rams.

Stafford and OBJ connected for seven total touchdowns last season in L.A. including the opening score in the Super Bowl the Rams went on to win despite Beckham picking up his injury.

The Rams have already signed Allen Robinson as a free agent this offseason, but all signs point to them still being interested in bringing back OBJ. Stafford is doing all he can to get that done.

“I’ve been in contact with him, both checking on his knee, his new addition to his family, and just letting him know that we’d love to still have him,” Stafford said on ESPN. “It was an unbelievable blessing to get the chance to play with a talented player like that and honestly, such a great teammate.”

“He was awesome from the second he stepped into our facility, which was a tough situation to learn as much as he had to learn as quickly as he did. It was really impressive to watch him go out there and do his thing and hopefully we get some more time together.”

It’s clear that Stafford and OBJ have a strong connection both on and off the football field. Stafford’s comments have to be music to Rams fans ears as it sounds like he’s looking to get the band back together as L.A. looks to defend its Super Bowl this season.