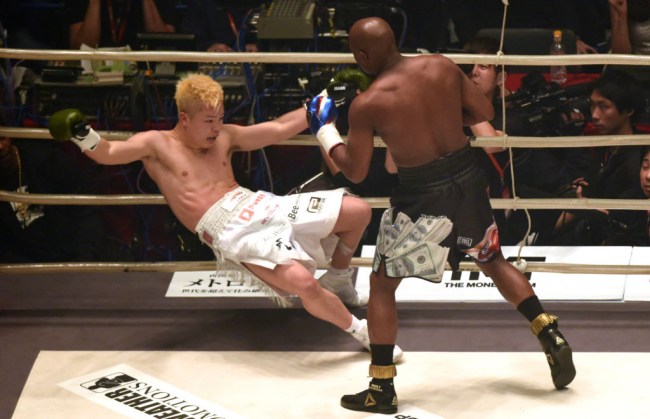 Immediately after the spectacle that was the fight between 41-year-old boxing legend Floyd Mayweather and 20-year-old kickboxer Tenshin Nasukawa came to an inglorious end talk turned to whether or night the exhibition boxing match was real or fixed.

The question was legitimate as Japanese MMA promotions in the past like the Universal Wrestling Federation and Pancrase have walked a fine line (and in many cases crossed over it) when it comes to rigging fights while claiming they’re real. (Think old school pro wrestling kayfabe.)

Another reason for the speculation about the Mayweather vs. Nasukawa fight being fixed was, well, did you watch it?

I know that I have never seen a boxer flop around in the ring and on the canvas the way Nasukawa did when Mayweather knocked him down three times in the fight.

Now, Mayweather CEO Leonard Ellerbe wants to set the record straight, claiming that in no way was Floyd’s New Year’s Eve fight in Japan predetermined. He even went so far as to call any claims otherwise “irresponsible.”

“Why would you say something like that? None of that s**t is true,” stated Ellerbe. “Nothing about anything Floyd does, has ever done, he won’t even, and has never even, when Showtime, and I can go back to HBO, the many, many years that we were doing stuff with them, 24/7, and all-access, they would say, ‘oh, could you do that?’ and Floyd would not be fake. Everything you see is real with him. He’s not with that fake sh*t.”