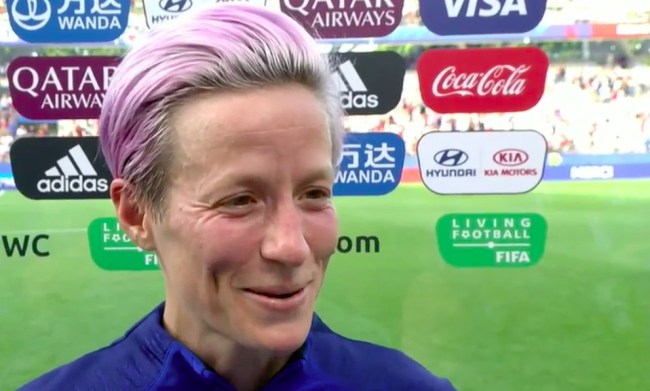 The U.S. Women’s National Team managed to do what their male counterparts could not a couple of years ago by actually qualifying for the World Cup, and on Friday, they’ll face off against France in the quarterfinals.

The USWNT is the top-ranked team in the tournament and the co-favorites to win it all along with their French counterparts so it promises to be one hell of a match—and if star striker Megan Rapinoe’s wishes are granted, it will be a “total shitshow circus.”

Speaking of shitshow circuses, Rapinoe has been at the center of some overblown controversy in the past couple of weeks due to her decision to not sing along with the national anthem during the pregame ceremonies—a decision she says she made in solidarity with Colin Kaepernick.

Earlier this week, Donald Trump expressed his displeasure with her supposed lack of patriotism because of course he did, and on Tuesday, Rapione made it very clear the two won’t be hashing out their differences any time soon.

“I’m not going to the fucking White House.” – @mPinoe pic.twitter.com/sz1ADG2WdT

Here’s what she had to say in an interview with Eight by Eight:

“I’m not going to the fucking White House.

“We’re not going to be invited. [Trump] tries to avoid inviting a team that might decline. Or, like he did when the Warriors turned him down, he’ll claim they hadn’t been invited in the first place.”

While I’d love to pull a “politics aside” here, it’s kind of hard to do that given the circumstances. With that said, even if you disagree with her stance, it’s impossible to deny Trump takes a laughably juvenile path whenever athletes decide to not “shut up and play” by exercising their right to free speech.

It’s worth noting Trump also has the right to not serve a championship team cold fast food if he’s so inclined, but when you consider they’re the UNITED STATES Women’s National Team, deciding to ignore the achievements of Americans playing for their country—assuming they manage to win the World Cup—would be a very bold move.