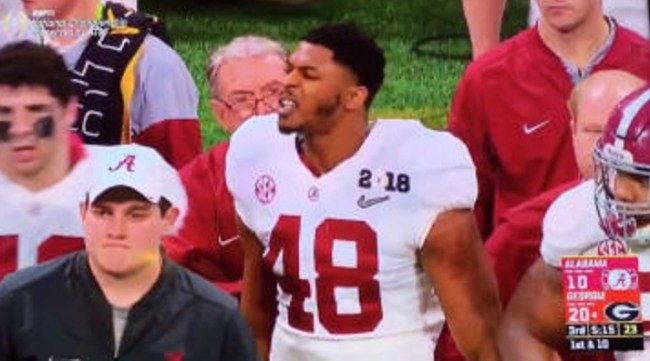 “I really felt like a jerk,” Mekhi Brown said after lunging at Alabama assistant Kerry Stevenson moments after being flagged for an unsportsmanlike conduct penalty in Alabama’s 26-23 national title win over Georgia. “That’s not how I am. I wanted to win, that’s what it was. I did something stupid. I could have cost us the game.”

There is no ‘us’ anymore. According to the 6-foot-5, 240 pound sophomore, he is transferring to Tennessee State University.

I have transferred to Tennessee State University… #TSU 🐅🐅🐅

According to the Tennessean, Brown had applied and been admitted to the school more than a month before the national championship, which gives credence to the idea that Brown’s outburst could have been the product of festering frustration with the program.

ESPN reports that Brown will be able to play immediately, as Tennessee State is an FCS school, but he would have to meet certain stipulations at the school before being allowed to join the football team.

TSU, who hails from the Ohio Valley Conference and finished last year with a 6-5 record, recruited Brown when he was at Carver High School in Columbus, Ga.

It should be noted that Tennessee State has dealt with its fair share of sideline flare-ups. In November, the school expelled senior defensive end Latrelle Lee after he punched strength and conditioning coach T.J. Greenstone numerous times on the sideline of a game. Lee was later charged with one count of aggravated assault causing serious bodily injury, the Tennessean reports.

Ironically, the dude was a criminal justice major who made the Ohio Valley Conference Commissioner’s Honor Roll.