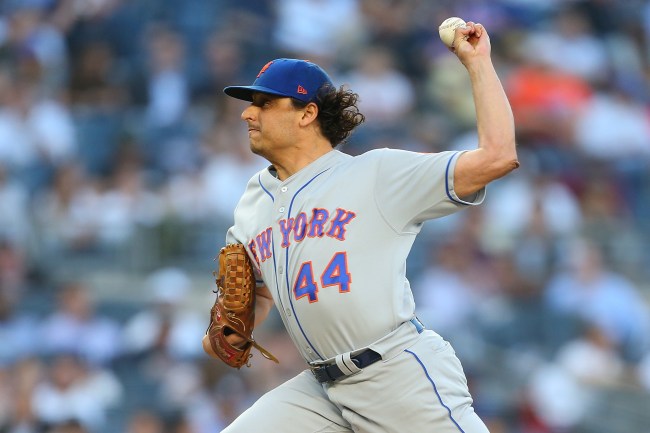 The incident went down after a brutal Mets loss to the Cubs that featured a questionable decision by Callaway in not using closer Edwin Diaz in the eighth inning which led to Seth Lugo giving up a go-ahead three-run homer to Javier Báez.

After the game, Callaway was repeatedly asked about the decision to not use Diaz in the Eighth which seemed to annoy him.

Mickey Callaway told one of the beat reporters they won’t use Edwin Díaz for five outs “just because you think so.”

This is a manager that doesn’t adjust and talks to reporters like they know absolutely nothing.

Callaway then reportedly went off on a tirade after he walked past Newsday’s Tim Healey who told him something that he didn’t like.

Incident started with Mickey Callaway cursing out Healey for being an antagonist.

Mickey Callaway and Jason Vargas just cursed out, and in Vargas case, challenged a reporter to a fight in the clubhouse.

Mickey did not like a remark made by a reporter as he walked by in the clubhouse.

That’s when Jason Vargas stepped in and threatened to knock the reporter the fuck out.

Vargas then got into a shouting match with the reporter, over a staredown, and said at one point: "Ill knock you the f*** out, bro."

He charged such reporter and had to held back by Gomez and Syndergaard.

The reporter in question did nothing wrong.

He says that to everyone every day.

We all tell people "see ya tomorrow" or "safe travels" when they are boarding the plane to the next city.

He was in no way out of line.

Mickey was clearly agitated. When asked if they need to reconsider their plan about 4/5 after day like today, he said:

"No, just because you think so? Absolutely not. We have a very good plan, we know what we’re doing and we’re going to stick to it.”

There were no punches thrown in this incident.

But, after a really bad, 5-3, loss to the Cubs, the manager cursed out a reporter and a starting pitcher told the reporter he'd knock him out.

The Mets are such a shitshow, it’s amazing.