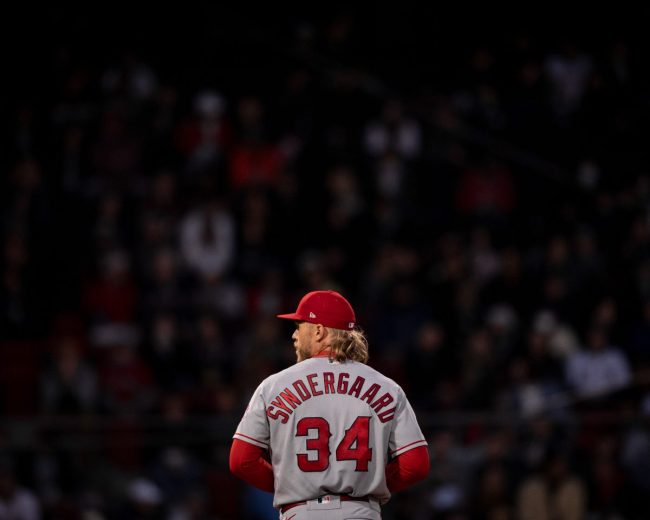 Noah Syndergaard apparently wants out of Los Angeles. And based on recent rumors surrounding the MLB trade deadline, he may soon get his wish.

The right-handed pitcher is reportedly rumored to be on the chopping block, with the Toronto Blue Jays seen as a favorite to land the flamethrower. The Phillies are also in the hunt, according to Jon Heyman.

Syndergaard has been with the Angels for one season after leaving the Mets on rocky terms.

Thor originally stated his intentions to remain in New York as the team stuck by him through Tommy John surgery. The Mets even offered a one-year deal worth over $18 million.

Shortly thereafter, he bolted, citing the uncertainty in the team’s search for a General Manager as his reason for leaving. A $21 million offer from the Angels likely didn’t hurt.

Now, the Mets find themselves in a World Series hunt while Syndergaard’s Angels sit below .500. That hasn’t stopped him from taking a few jabs at his former team this season. Still, it appears he now hopes to be traded to a playoff contender.

Syndergaard seemed to signal his desire to leave LA with a tweet on Tuesday, and Mets fans took it as an opportunity to remind him of his decision to get out of New York.

Mets fans took a moment to troll their former pitcher while letting him know about the success they’ve had without him on the roster.

Glad to see you got the stability you claimed to have left the Mets to get.

still think it was smart to leave the mets and then publicly bash em?

The entire Mets rotation is better than you lil bro

Another fan simply posted the quote of Syndergaard bashing the Mets following his departure.

"This is a really important year for me. This is kind of a make or break time for me. I didn’t want to gamble on that kind of uncertainty that has been going on with them.”

We’ll see if Thor gets his wish and is dealt to a playoff contender. If so, he might wind up facing his former team in the postseason.