MASSIVE Brawl Ensues In Mexican Baseball League After Batter Gets Hit By Pitch, Attacks Pitcher With His Bat AND Helmet 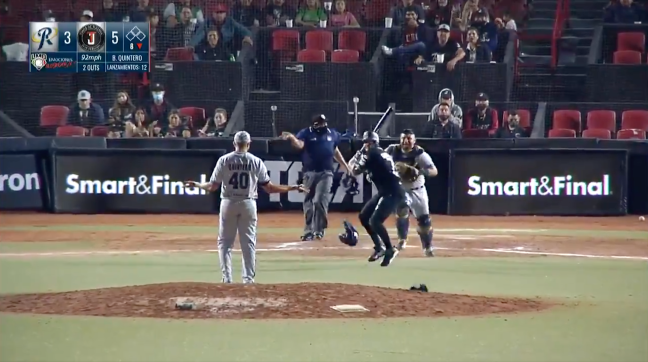 There is some serious bad blood between Los Toros de Tijuana and Rieleros de Aguascalientes of the Mexican Baseball League. Los Toros are one game behind in the Northern division, while Los Rieleros are 10.5 games back.

On June 15th, the two teams met for the first game of a three-game series. Tijuana put 22 runs on the board, allowing Aguascalientes to only two. A score discrepancy of such significance in baseball can be considered disrespectful (it’s ridiculous) and that appears to be the case here.

Los Toros lost game two but returned with a 13-1 win in game three. Los Rieleros took umbrage to the score. When the two teams met on Wednesday, the blood spilled over. By the eighth inning, it was an all-out brawl.

How it played out:

Los Toros hit a bomb in the fifth inning and Gabriel Gutiérrez took his time rounding the bases.

Los Rieleros didn’t like the time it took him to get around the bases and beaned a few batters in the following innings. At one point, the team’s catcher got tossed, and so did the batter who was hit— likely to keep him from starting a fight.

In the bottom half of the eighth, Gutiérrez (who hit the home run), also wore one on the shoulder. There was no attempt to hide that the pitch up-and-in was intentional. Gutiérrez was pissed and immediately charged the mound. He threw his bat and his helmet at the pitcher and the benches cleared for both teams.

It was utter mayhem. Haymakers were flying everywhere!!!!

It took nearly 20 minutes to get the two teams separated, but once they did, the game resumed. Only three players were thrown out, which seems low.

The score held 5-3 into the bottom of the ninth. Los Toros were three outs away from the win when out of the bullpen came none other than 44-year-old Fernando Rodney to shut it down.

After the game, Tijuana slugger Leandro Castro blamed the entire incident on Los Rieleros. He said that they were still upset over the 22-2 win and hopes that it doesn’t happen again.

What a wild scene in Tijuana.