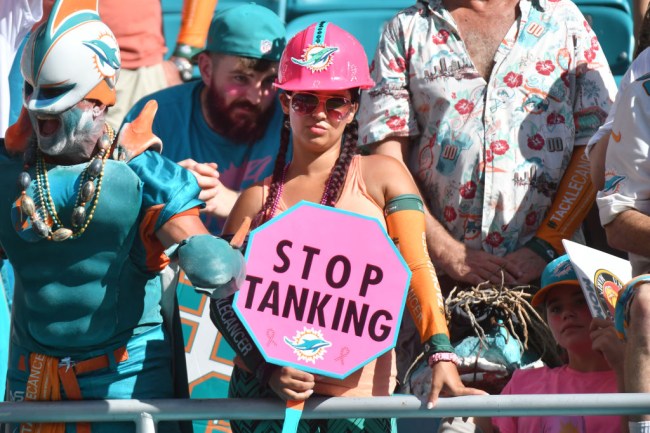 I personally didn’t expect the Miami Dolphins to make any major moves ahead of Tuesday’s trade deadline that didn’t involve them offloading yet another solid player to a team in exchange for virtually nothing, and as a result, I was a bit taken aback to learn they’d decided to acquire Aqib Talib and a fifth-round pick from the Rams.

Sure, the cornerback isn’t necessarily a superstar but he can certainly hold his own on the field and you kind of had to wonder why the Dolphins would be willing to give anything up—even if it was just a future pick—to pick up a player who might make them marginally better.

What’s at risk here, of course, is the top selection in this year’s NFL Draft, which Miami is currently pursuing as they jockey with the Bengals—who seem to be phoning things in as well—to stay at the bottom of the basement in the NFL.

The Dolphins reportedly made the decision to go into tank mode after the end of last season, and while Roger Goodell doesn’t seem too concerned with their efforts (or lack thereof), all of the evidence indicates they’re doing what they can to prepare for a full rebuild.

So why would the Dolphins trade for Talib if they wanted to keep losing? Well, as For the Win notes, the trade may have been less about the safety and more about the picks they’ll receive thanks to the Rams, who were mostly looking to offload his contract to free up cap space.

Talib is currently sidelined with an injury and the Dolphins have no obligation to bring him back before he becomes a free agent at the end of the year—at which point they’ll earn a compensatory pick for their troubles in 2021, where they could potentially follow in the footsteps of the Patriots and stumble upon a franchise quarterback if the whole #TankForTua thing doesn’t work out.

Say what you will about the Dolphins this year but I’ll be damned if they don’t have the tanking thing down to a science.