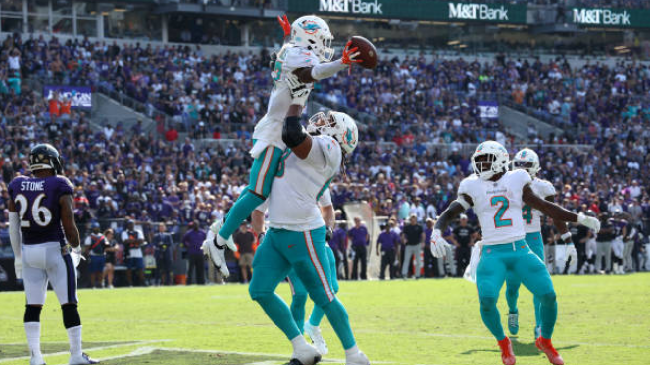 No lead was safe in the NFL this weekend. The Las Vegas Raiders had a 20-0 lead at halftime of their game against the Arizona Cardinals and ended up losing in overtime.

The Cleveland Browns scored to go up by 13 against the Jets with 1:55 left in their game and gave up 2 touchdowns over the next minute and a half to lose by 1 at home.

However, there was one huge comeback that was particularly important as it kept on of the NFL’s weirdest trends alive.

The Miami Dolphins trailed the Baltimore Ravens by 21 points entering the 4th quarter of their matchup on Sunday. It took them just under 10 minutes to change that with 21 unanswered points.

Justin Tucker made a 51-yard field goal to give the Ravens the lead back with 2:18 left in the game, but that gave Tua Tagovailoa too much time to throw his 6th touchdown pass of the day. He found Jaylen Waddle in the end zone with 14 seconds left to give the Dolphins the win.

That comeback continued a trend of the Miami Dolphins winning every game since the start of 2021 against opponents with quarterbacks whose last names contain an “O”. Meanwhile, they’ve lost to every opponent whose quarterback’s last name doesn’t contain the letter.

The Ravens are now responsible for 2 of the 11 Dolphins wins in this streak. The only team who has lost to the Dolphins more during this time is the Patriots, who the Dolphins beat for the 3rd time in the streak during Week 1.

The Dolphins will take on an O-less opponent in Week 3, meeting up with Josh Allen and the Buffalo Bills. The Bills are responsible for 3 of the 9 Dolphins’ losses during this streak and are expected to keep the streak alive on Sunday.

Then a Week 4 trip to Cincinnati will test their win streak as Joe Burrow attempts to turn the Bengals season around.

It’s certainly a strange trend, but it will be one to keep an eye on over the next few weeks for the Miami Dolphins.