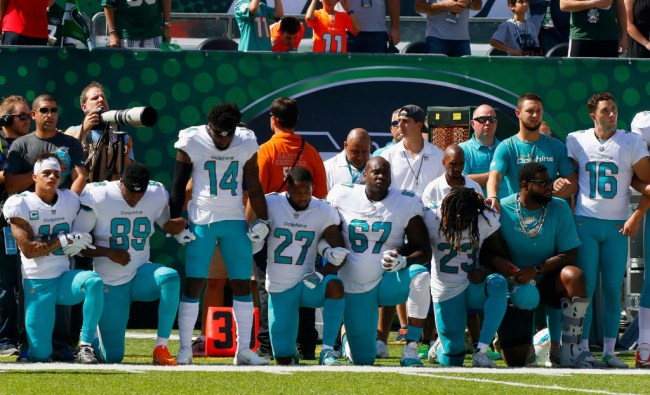 According to a document released to the AP, Miami Dolphins players could be suspended by the team for up to 4 games.

Miami Dolphins players who protest on the field during the national anthem could be suspended for up to four games under a team policy issued this week.

The “Proper Anthem Conduct” section is just one sentence in a nine-page discipline document provided to The Associated Press by a person familiar with the policy who insisted on anonymity because the document is not public. It classifies anthem protests under a large list of “conduct detrimental to the club,” all of which could lead to a paid or unpaid suspension, a fine or both.

Back in May, Dolphins owner Stephen Ross made headlines when he reportedly told the NY Daily News that all of his players would be standing before backtracking on his comments.

All of our players will be standing,” Ross told the New York Daily News on Monday.

“Initially, I totally supported the players in what they were doing,” said Ross. “It’s America and people should be able to really speak about their choices.”

“I have no intention of forcing our players to stand during the anthem and I regret that my comments have been misconstrued,’’ Ross said in a statement to the South Florida Sun Sentinel. “I’ve shared my opinion with all our players: I’m passionate about the cause of social justice and I feel that kneeling is an ineffective tactic that alienates more people than it enlists.

We’ll see what the Dolphins have to say once the players and NFLPA push back on the team’s new policy.