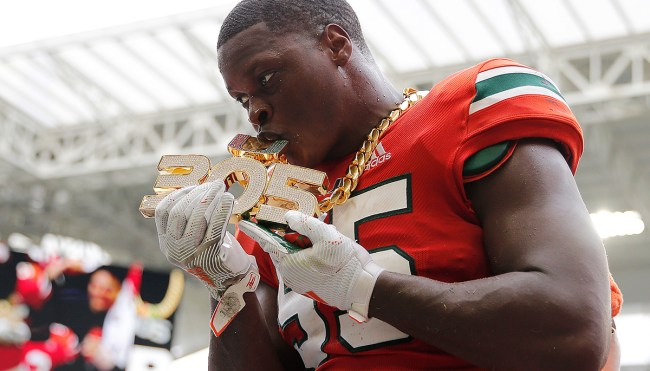 It appeared Miami’s football program was on the verge of Officially Being Back after Mark Richt was tapped to help reverse the Hurricanes’ fortunes in 2016, and it was hard to argue The U didn’t have its swagger back after the team introduced a new incentive during his second season as head coach in the form of the Turnover Chain.

As you can probably surmise from the name, the Turnover Chain was a massive piece of bling that was awarded to defensive players who were able to recover a fumble or snag an interception; doing so earned them the right to rock the necklace on the sideline until they headed back to the field for the next possession.

The gimmick was an instant hit that spawned plenty of inferior imitators, but it gradually began to lose its luster after it became pretty evident Miami was Not Back. Richt decided to retire after the team finished with a 7-6 record in his third and final season with the Hurricanes, and while Manny Diaz (who was largely responsible for its creation) kept the Turnover Chain around during his tenure, it appears we’ve reached the end of an era now that he and the school have parted ways.

On Monday, the world learned that Miami offensive line coach Alex Mirabel informed recruits who attended a prospect gathering over the weekend that the Hurricanes have decided to retire the Turnover Chain.

The Turnover Chain is Dead. pic.twitter.com/x6vkK09B95

The news drew mixed reactions from fans, with some grieving the development and others celebrating its demise.

Really going to miss the annual Miami FL tradition of whipping out the Turnover Chain while down 31 points in the 2nd half 😢 pic.twitter.com/MwR61xHRm3

Rip turnover chain we had some good times! pic.twitter.com/kms9yjqiMF

Turnover chain served its purpose. Became the biggest item in college sports. Now back to the basics.

RIP Turnover Chain 💔. Hate you had to be the SCAPEGOAT for Manny's failures lol .. guess we can watch every other team in the nation pull out their cheap imitation of you. pic.twitter.com/gysht7VXSr

As much as I LOVE(D) the turnover chain, it’s time for it to go. That first season was special and unique. But now? I don’t know.. Let’s win an ACC Championship.

Remember: don’t cry because it’s over—smile because it happened.