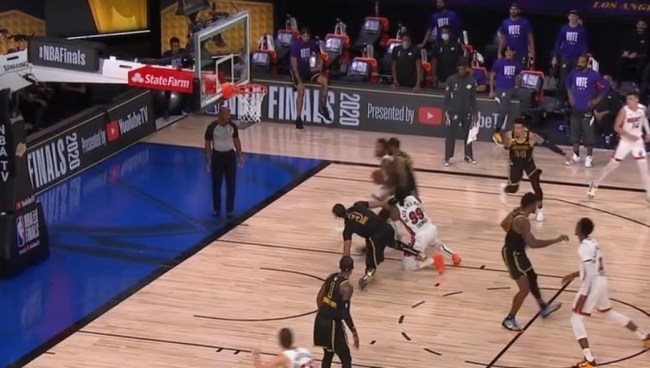 There could be a bit of controversy coming out of game 5 of the NBA finals.

During the game, Lakers center Anthony Davis appeared to intentionally hit Jae Crowder in the face while both players were down on the ground in the third quarter.

A couple more angles of the AD-Crowder play in question from last night's 3rd Q: pic.twitter.com/X1wcCJoN6F

I wonder if the league takes a look at this. Intentional act? https://t.co/dCpcKIkYMv

Heat fans are now calling for the NBA to look into the matter and suspend Davis for the cheap shot on Crowder.

Reminder that JR Smith was suspended 2 games for doing this to Jae Crowder in 2015 pic.twitter.com/AY0Tl97rJB

Anthony Davis needs to be suspended for purposefully hitting Jae Crowder on the face pic.twitter.com/xr12hSMRYh

AD should absolutely be suspended for this but he won’t be because the rules are different for stars. He looks for Crowder and then punches him in the throat https://t.co/Y0AS7QUeee

Update: The NBA said they would not give Anthony Davis a retroactive flagrant for the play.

The NBA reviews all footage from every game for this type of incident. Sources said that after the review of all the camera angles, league officials decided the contact was not considered a flagrant.https://t.co/mzUEsAVCz8