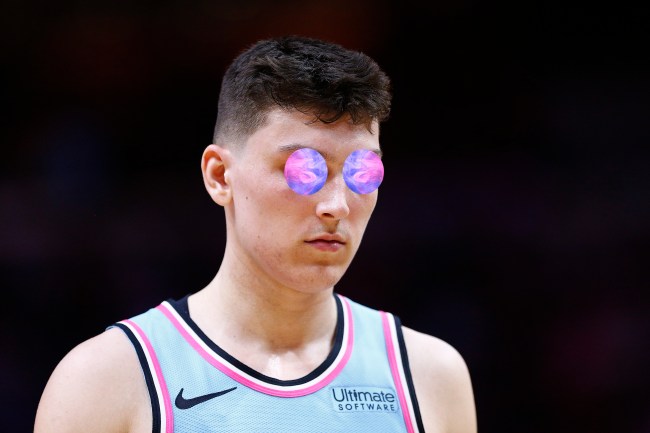 Sports fans are creatures of habit. That’s why whenever a team releases a new uniform concept, you won’t need to scroll long in the subtweets before spotting a Team America projectile vomit GIF or Lloyd Christmas dry heaving at the sight of seeing Harry with Mary Swanson.

We saw this with the unveiling of the Falcons’ Longest Yard unis. And the L.A. Rams Microsoft Paint-inspired threads. Or whatever it is the Utah Jazz were smoking with this red-hot rubbish.

But every blue moon, a franchise releases something so beautiful, so transcendent, that even the loneliest troll on the internet stops angrily typing to drink them in.

The new Miami Heat ViceVersa uniform is that shooting star, and suddenly I feel the inescapable urge to chomp on some shrooms and watch the 2001 Academy Award-winning film Monsters, Inc.

According to ESPN’s Zach Lowe, the Heat’s “Vice” uniforms were supposed to end last season, but at the last minute the team decided to create one grand finale to a “Vice” concept that has generated five times more jersey revenue than equivalent sales from the team’s three championship seasons combined.

When Riley first saw the prototype of this final “Vice” uniform, he looked it over and concluded, “You know what? I trust you guys,” said Michael McCullough, the team’s executive vice president and chief marketing officer.

“Pat is traditional,” McCullough said. “If he could have us wear our blood red uniform every night, he would. That’s his uniform. But he trusts us.”

Here's a closer look at the new Vice uniforms and Vice court.

More details here, and some early info on what the Heat's Earned Edition uniforms could look like this season https://t.co/YHkKNw4GvR pic.twitter.com/hSTXQOZcD2

The only thing I can think of when I see the new Miami Heat alternate uniforms are the old Trix yogurts #HEATTwitter pic.twitter.com/O4nt4lK02K

Those Trix yogurts were delectable. Would eat again. On mushrooms. At a Heat game. That is my heaven.