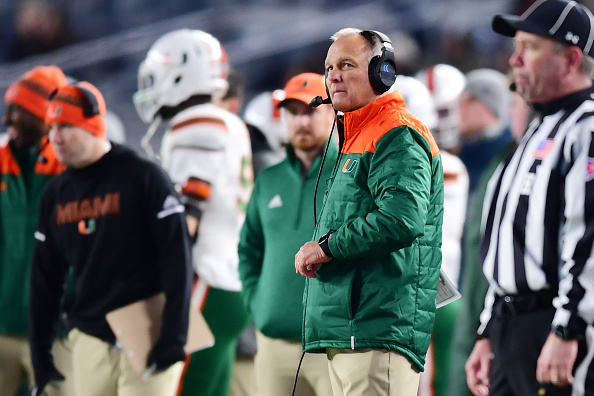 The Miami Hurricanes were one of the most disappointing teams this year after finishing 7-5 in a season where everyone thought they would contend for a national championship.

This week the Hurricanes got embarrassed on a national stage when they lost 35-3 to Wisconsin in the Pin Stripe bowl which led to many discussions about coach Mark Richt’s future with the team.

While many figured that Richt would retool his coaching staff he shocked the college football world this afternoon by announcing his sudden retirement.

Per someone in direct contact with him, Richt knew he had to make staff changes and current course wasn't acceptable. He initially said he understood and accepted that, but ultimately decided Saturday he didn't want to do all of this and continue on: https://t.co/ralcF1mkpl

Just spoke to Miami AD Blake James. He said he’s “in shock” over Mark Richt’s decision to step down at Miami.

Mark Richt sounded as defeated as I’ve ever heard him 48 hours ago. Richt said something had to change. Blake James said he was on board to make sure Richt would fix things. Now Richt has stepped down. What happened in those 48 hours is the question?

The timing of Mark Richt's retirement is staggering in light of the loss of Manny Diaz. The 'Canes basically had their replacement.

Wow 2019 will be a great year for the city of Miami.. Dolphins up next

Good bye, but the State of the program needed change!!!

Others want Lane Kiffin to take the Miami job.

Did someone say there’s an opening at Miami? @Lane_Kiffin pic.twitter.com/IRY1VToFFW

Is there a more Miami Hurricanes coach than Lane Kiffin? pic.twitter.com/4OuOYqogSj

I love your bio…say hello to the family for me. Give them my best. @Lane_Kiffin pic.twitter.com/RH9hKv0Tuo