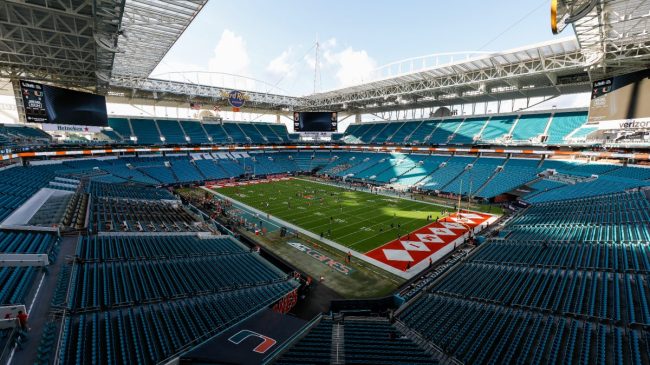 The Miami football program is taking some heat for a recruiting graphic posted during the commitment of a five-star prospect. The Hurricanes landed a pledge from top offensive lineman Francis Mauigoa over the weekend.

The 6-foot-6, 325-pound monster chose Miami over other notable programs like Southern Cal, Alabama, and Tennessee, giving the Hurricanes the ninth-ranked class in the 2023 recruiting cycle. Mauigoa is the nation’s ninth-best player according to 24/7 Sports and was the second big-time commitment of holiday weekend.

But while the program is on a roll on the recruiting trail under new head coach Mario Cristobal, they’re also catching some flak for the graphic that Mauigoa used in his commitment to the school.

Fans were quick to point out the half empty stadium shown in Mauigoa’s commitment post. They’re roasting Miami for the interesting choice of recruiting graphic.

Miami can’t even fill the stands in their own graphics https://t.co/k8t6BF60VY

The commitment post with the half empty stadium 😂😩😭 https://t.co/kcqLWTyn5a

The half-empty stadium has me ROFLing every time🤣 https://t.co/aQQX0pDG4C

Best part is the half empty stadium

Miami has struggled prior to Mario Cristobal’s arrival, going just 28-21 over the last four seasons. The Hurricanes have posted just one 10-win season since joining the ACC in 2004 and have lost 10 of their last 11 bowl games.

With the mediocre product on the field, fans are often hesitant to show up to games. Cristobal is looking to change that, though, and the commitment of a five-star player is a great start.

If more of these pledges come rolling in, the wins should begin to pick up. And the Hurricanes will have a few more salty fans in the comments the next time a top prospect commits to the program.