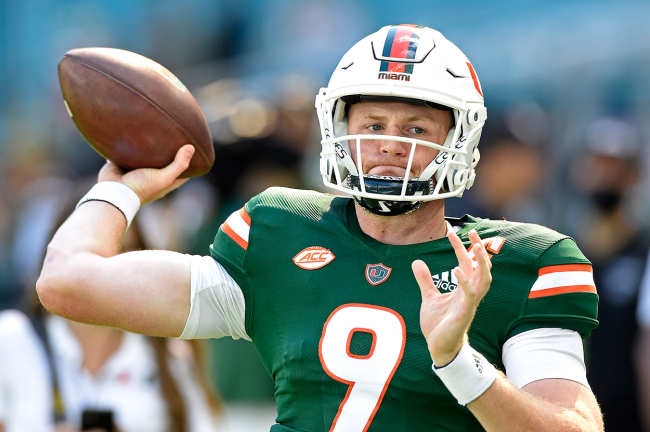 Miami quarterback Tyler Van Dyke continues to receive a lot of way-too-early 2023 NFL Draft hype. The Hurricanes’ signal-caller took over the starting job last season after D’Eriq King suffered an injury and led a struggling team to a 7-5 record.

Hopes are much higher in Coral Gables this fall as Van Dyke enters his third-year sophomore season. The 6-foot-4, 225-pounder completed 62.3% of his passes for 2,931 yards and 25 touchdowns with only six interceptions in 2021.

As 2022 quickly approaches, the Connecticut-native is doing whatever he can to get better, learn and grow. As such, Van Dyke is in attendance at the Manning Passing Academy in Louisiana this weekend.

On Friday night, he got the chance to show off his arm strength. As each of the quarterbacks took turns throwing in an after-dark session, they finished their reps with a deep ball over the middle.

Van Dyke stepped into his throw and threw an absolute laser. The spiral was perfect and the ball just looked different out of his hand. You know, one of those throws where you sit back and just go “oh, damn!”

Obviously, the one rep against air doesn’t tell you how someone will perform against a defense in-game. However, Van Dyke clearly has next-level arm strength.

As a result, Mel Kiper Jr. has him as the third-ranked quarterback in his way-too-early 2023 NFL Draft big board, behind only Bryce Young and C.J. Stroud. He is also a dark horse Heisman Trophy contender.

Miami quarterback Tyler Van Dyke has what it takes.

Although the first three of his nine games as a starter last fall were not the most spectacular, his final six starts were exactly that— spectacular.

Over his final six starts of the 2021 season, Van Dyke threw for at least 300 yards and three touchdowns. In all six games. He averaged 365 passing yards over the course of that stretch and Miami went 5-1.

If Van Dyke can find that end-of-season success and consistently perform on that level in 2022, the sky is the limit.