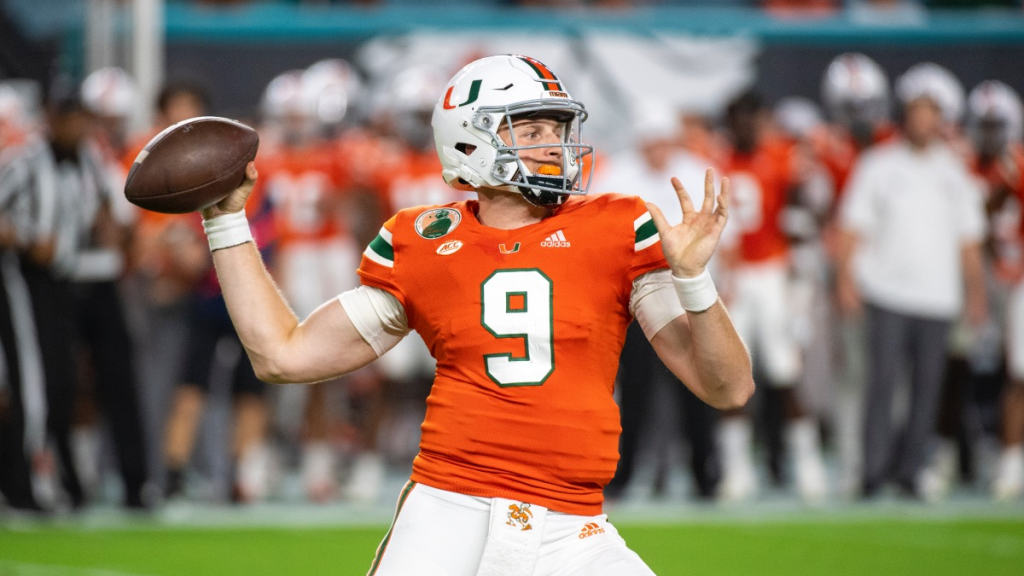 The Miami Hurricanes dropped in the rankings this week to #25 in both the AP Top 25 and Coaches Poll. This came after a 17-9 loss to the Texas A&M in College Station with the Aggies coming off a brutal loss to App State.

Anyone with two eyes could see that the Aggies were going to take out their Appalachian State frustrations on their ACC visitor, but Miami Hurricanes quarterback Tyler Van Dyke was just stoked to be there. Kind of. There is no evidence he enjoyed losing but a recent clip making the rounds reveals the Miami Hurricanes quarterback prefers playing everywhere other than Miami’s home field at the Hard Rock Stadium.

Here is the clip that’s making the rounds where 6’4″, 224-pound Miami Hurricanes QB Tyler Van Dyke is asked if he prefers to play home games or away:

@jordanpalmer How quiet is Kyle Field going to get tonight? @tylervandyke seemed pretty fired up to have a couple of those big moments when we talked to him this week. #miamifootball #theu #tylervandyke #miami #miamihurricanes #canesfootball #305 ♬ original sound – Jordan Palmer

Here is that clip on Twitter if you’d prefer that to TikTok:

“Come to Miami – where the best part of football is when you leave” pic.twitter.com/lbuToitT1z

For anyone who would rather read than watch, here’s what Miami’s QB had to say:

“I like away games better. We don’t really have much of a college atmosphere ’cause we play at Hard Rock. So we’re 25 minutes away from campus. So a lot of students don’t go up to most of the games, unless it’s a big game. That’s why I like going to away stadiums and seeing that college atmosphere, playing there, and making the crowd quiet.”

Interestingly, ‘quarterback consultant’ Jordan Palmer isn’t at all surprised by the answer from Miami’s QB. He says quarterbacks often prefer to play on the road. I’m sure the reasons why that’s true (for some QBs) could fill out a long list so we’ll save that for another day.

Miami Hurricanes players, staff, and fans have the second longest commute from their campus to their football stadium of any team on the Eastern Seaboard. Only UConn has a further commute to get to games. Miami is notorious for having some of the worst street traffic of any city in America. Drivers in Miami are masochistically unhinged.

It’s 20 miles from the University of Miami’s Coral Gables campus to the Hard Rock Stadium in North Miami and in the absolute best of conditions, say at 5 AM with zero traffic accidents, that could be done in 30 minutes each way. In normal Miami traffic, it can easily take an hour or more.

How does Tyler Van Dyke actually play at Home vs on the Road?

ESPN has a pretty good split breakdown of Miami Hurricanes QB Tyler Van Dyke’s performance at home versus on the road. In the 2021 season, Tyler’s rating was significantly better at home vs away, 189.3 vs. 137.6.

He clearly performs better at home, so it’s interesting to hear that he prefers to play on the road.

If you have the time, here is the full interview you can check out: