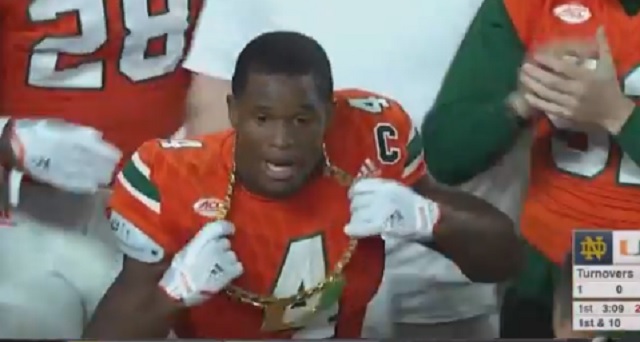 The turnover chain is the best thing that’s happened to Miami football. For so many years the University of Miami football team has been lifeless and boring but a ridiculous oversized chain has brought the U back to national forefront.

During tonight’s huge Notre Dame-Miami game, the U busted out the turnver chain three times against a stingy Irish offense time has only turned the ball over seven time prior to tonight’s game.

The idea of the turnover chain originated two weeks before the season started when Miami cornerbacks coach Mike Rumph asked a local Miami jeweler, if he would make a rope chain players could wear after forcing a turnover.

The idea then proceeded to evolve into a large Cuban chain style necklace with a huge “U” emblem.

The initial thought was a rope chain that players would get to wear after forcing a turnover.

“Naw, man,” chimed in Wilfork, recently retired after a 13-year NFL career. “We got to do the Cuban link, AJ!”

The consensus among the three was a collective “Hell yeah!”

“In Miami, what are we famous for? We’re famous for the Cuban chains,” Machado says. “But we need to add a little something to it.

“So we did a big U charm — orange stones, green stones in there to flash it out.”