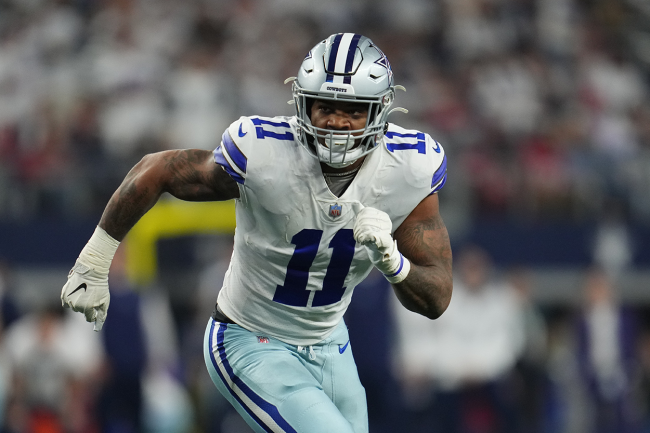 Micah Parsons is 6-foot-3, 245 pounds— and that might be an understatement. The second-year linebacker out of Penn State who is the reigning Defensive Rookie of the Year is a monster.

Over the course of 2021, the 23-year-old Cowboys edge rusher recorded 64 solo tackles, 13 sacks and three forced fumbles in 16 games. He is not showing signs of slowing down, literally.

Not only does Parsons have a massive frame, he is wicked fast and won a race against Tyreek Hill, Nick Chubb and Trevon Diggs during last year’s Pro Bowl festivities. As a result, he calls himself the fastest player in the NFL, and he has not given any reason to disagree.

Last season, Dallas running back Tony Pollard ran faster than any ball carrier for the Cowboys. He reached a top speed of 21.17 miles per hour on this touchdown run down the sideline:

However, Parsons is just as fast, if not faster, and proved that to be the case at training camp. In a video that shows just how much of a monster that he is, Parsons lined up as the left outside linebacker, saw Pollard streaking down the sideline, and chased him down. He closed in on his running back in a HURRY.

Watch Micah Parsons close on Tony Pollard in a sprint down the sideline pic.twitter.com/EHp5WxwStc

Remember, Parsons has three inches and nearly 30+ pounds on Pollard. But that didn’t stop the young linebacker from getting on his horse, showcasing his insane speed for his size, and running down a running back who averaged more than 5.5 yards per carry last year. That’s scary.