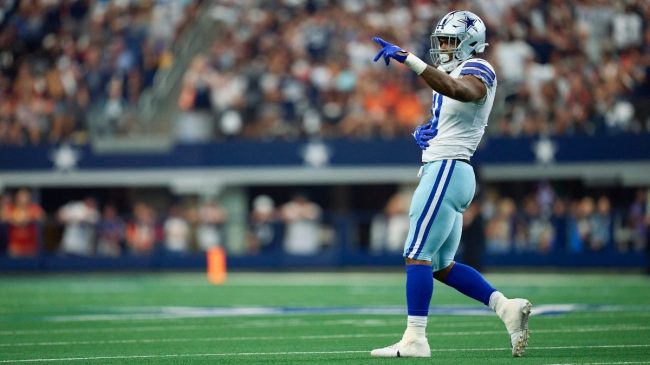 The Dallas Cowboys found a way to defeat the Cincinnati Bengals without Dak Prescott under center. Micah Parsons balled out, as usual, as the defense nearly carried Dallas to a big win on Sunday. However, there was one particular play by Trevon Diggs that caught Parsons’ eye and his hilarious reaction has fans laughing hysterically.

Late in the fourth quarter, the Cowboys needed to make a defensive stop. The Bengals were hoping to drive the field and have a chance to kick the game-winning field goal. Instead, Trevon Diggs came out of nowhere and made a huge defensive play to force Cincinnati to punt the ball. You can see Micah Parsons celebrating the tackle with his teammate.

What a tackle by #Cowboys Trevon Diggs. pic.twitter.com/e9roFKiRI8

During the post-game interviews, Parsons shared his disbelief with the media. It was funny watching his reaction, Diggs typically doesn’t deliver the boom in his tackles. Regardless, Micah Parsons loved seeing it.

Hilarious response from @MicahhParsons11 about Trevon Diggs making a big tackle on 3rd down late in the 4th quarter to help the #dallascowboys beat the Bengals… pic.twitter.com/Lp7GLPWcoh

Dallas earned a much-needed victory and all eyes are on Trevon Diggs. The Cowboys’ defense came up big and it appears the fans agree with their star linebacker. Especially considering Diggs is more of a finesse player.

Everybody was shocked to see 7 making a solid tackle😂

We all know Trevon Diggs isn’t the best tackler.

Maybe we’ll see Diggs make more big tackles throughout the season. If not, we can certainly rely on Micah Parsons bringing down opponents. Look for the Cowboys’ defense to continue playing strong while the offense continues figuring it out.