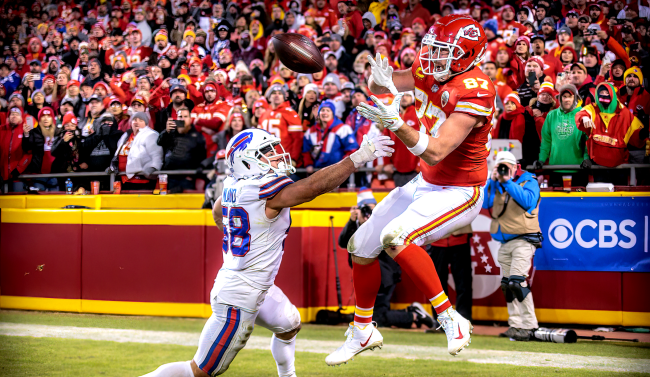 While it wasn’t exactly Evan McPherson calling his shot, Travis Kelce came pretty darn close with what he had to say on the sidelines just prior to scoring the game winning touchdown on Sunday.

On the sidelines, after coming back not once, but twice in the last 62 seconds of the game, Chiefs tight end Travis Kelce wanted the game to finally come to an end.

Responding to his quarterback Patrick Mahomes, a frustrated-looking Kelce shouted, “End this sh-t! End this sh-t!”

Which, as we all know, they did when Mahomes hooked up with him for a game winning 8-yard touchdown pass.

After making the catch, Kelce, while getting mobbed by Mahomes and his other Chiefs teammates, shouted, “Greatness, dog! Greatest! Great ball! Great… ball!”

"GAME!" 🗣@TKelce was mic'd up for the @Chiefs' walk-off winner pic.twitter.com/ueaN8ShNYB

Related: A Mic’d Up Ezekiel Elliott Was Stunned, Confused By The Result Of The Cowboys’ Final Play

NFL fans loved what Travis Kelce had to say

The best TE right there.

Does somebody have a nice little wall to run through? https://t.co/P5dQMeOJp7

Interestingly, that was at least the second time that Kelce and Mahomes audibly called their shot during the game.

Down 36 to 33 with eight seconds left, Mahomes could be heard yelling “Do it, Kels!” before snapping the ball and hitting his tight end for a 25-yard gain that set up the game-tying field goal.

Volume ⬆️ here at the very beginning you hear Mahomes yelling "do it, Kels, do it, do it!"

And he rips the ball right before getting hit. Regular route they had planned prob doesn't get them into Butker's realistic range. pic.twitter.com/GIiIyYCT3P

“He wasn’t necessarily supposed to do that, but after the timeout, we got a look at what the defense was doing,” Mahomes said about the play. “He actually said it to me. He said, ‘Hey, if they do it again, I’m going to take it right down the middle between both guys guarding me. He went up the field, I gave him the ball, and we got into field goal range.”