A Mic’d Up Ezekiel Elliott Was Stunned, Confused By The Result Of The Cowboys’ Final Play 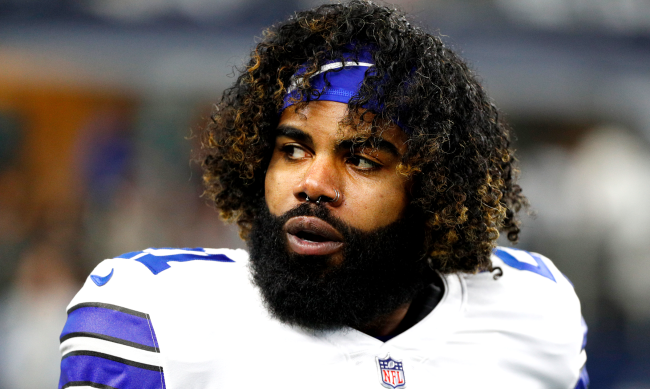 Count Dallas Cowboys running back Ezekiel Elliott among those who had no idea what was going on at the end of his team’s playoff game against the San Francisco 49ers on Sunday.

When Dak Prescott took off running with no time outs and just 14 seconds remaining in the game everyone from the broadcasters to fans at home were wondering what he was doing.

Elliott, who was on the sidelines during the play, and has reportedly been playing with a torn PCL since Week 4 of the season, was mic’d up watching the play unfold just like an enormous chunk of America.

“They’re defending all the sides,” someone on the Dallas sideline said to Ezekiel Elliott just prior to the play. “They ain’t got nobody in the middle. You can get about 15. Go down and take a shot at the end zone.”

Prescott was indeed able to get about 15 yards by running up the middle, but as everyone knows, that’s when all hell broke loose.

“What happened? Hey, what happened?” Elliott asked people on the sidelines. “The referee got in the way?”

George Kittle met with Chauncey Golston after the game in the middle of the field and told him, “I didn’t know what was happening. That was the most stressful thing I’ve been a part of.”

“I don’t even know what to say!” Golston replied, looking incredulous.

The final drive of the #Cowboys–#49ers playoff game via NFL Films@EzekielElliott: "What happened? the referee got in the way?" pic.twitter.com/2iqdHyaQjM

The costly mistake had everyone from Colin Cowherd to O.J. Simpson looking to place the blame at someone’s feet.

Cowboys coach Mike McCarthy has since defended the play call, maybe a little too much, which he and offensive coordinator Kellen Moore agreed was the right move at the time. A move that is going to be talked about for many, many years to come.