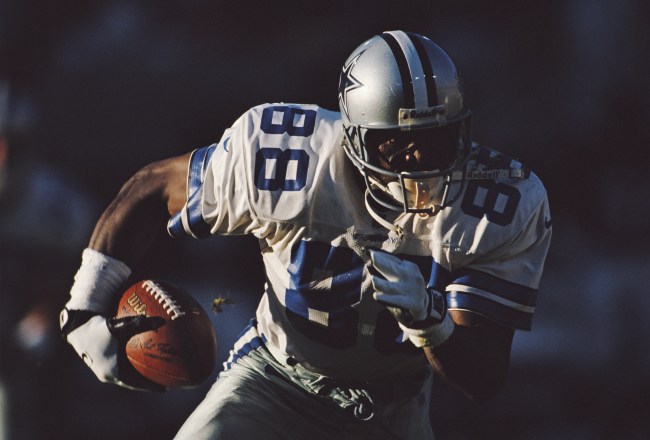 While Michael Irvin was best-known for making huge plays during his days in the NFL — hence the whole “The Playmaker” nickname that he earned himself — the dude was an absolute savage for going just as hard off the gridiron as on it. The Hall of Fame wideout partied like a damn rockstar, understanding that his individual accomplishments and team success with the Dallas Cowboys gave him access to pretty much anything he wanted.

I couldn’t imagine being 20-something and having the world at your fingertips like that, knowing you can walk into any private room and be treated like a king. Unfortunately, that kind of partying often got Michael Irvin in some hot water — especially once he retired from the NFL — where he was arrested for possession of cocaine in the year 2000, and ran into a few other legal troubles.

So what was Irvin’s lifestyle like when he was on top of the world as a Pro Bowl wideout winning Super Bowls with the Cowboys? In a word: reckless.

Joining the Pardon My Take podcast recently, the former wide receiver was asked about his partying habits while he was still playing in the NFL, with Irvin detailing a crazy routine of going out, chasing ladies, drinking and repeating pretty much everyday until his birthday in March. Take a look at what he had to say below.

“You’re having fun and the fun overtakes you. It’s OK to have a problem, but it’s a problem when the problem has you,” Irvin told the hosts.

“For all of my life, I could do all of these things — partying, having fun, catching women, out drinking, doing all of that stuff. But I did it up til March. My birthday is March 5th. The second weekend in March is when we started back training. So I would always have a blast, have one big-time party. Wild out girls, getting high, everything. And then after that, I started training. And I never did anything while I was training.”

“Now, during the week of practice, all we would do is Thursday night, we would go out. That was our night out, because Friday is a light day (for practice). Thursday night would be the day the night we go out. We’d go to Cowboy Cafe, have drinks, mess around, chase girls, do whatever, have a good time. But it was really team-bonding moments.”

Sheesh, that’s… exhausting. As crazy as it is to see the partying routine of Michael Irvin when he was still playing, it’s wilder to think this guy had the ability to recover as fast as he did in order to get back in shape and go to work. That’s something that’s rare AF, especially as you get older — trust me, I would know, as a hangover seems to last three days for me now. Much like Dennis Rodman, another legendary party animal, “The Playmaker” was a rare specimen in that regard.

As much fun as Irvin had while still in the NFL, he got candid about when the partying got to be too much: Which came after he retired.

I already mentioned his cocaine arrest the year after he called it quits, and the former wideout talked about how difficult it was changing his annual routine of partying all offseason until March came around. Without that strict regimen, he struggled to ever get out of party mode.

“Where I got lost in the partying is when I retired. When I retired and I go through February, I’m getting high and having a great time, and then March comes around, and I’m still having a good time. And then April comes around, and I said, ‘OK, enough of this. I gotta get focused on what I’m gonna do next. I’m no longer playing football.’ In all the years prior to that, I was always able to stop. But now, I could not stop. I had to get some counseling on it and find out what it was. I was switching addictions from playing football.”

Luckily, Michael Irvin got back on track and cleaned things up for himself — but it was a long road towards recovery. But he seems to have it all under control these days, which, when compared to how wild his life used to be, is a complete 180.