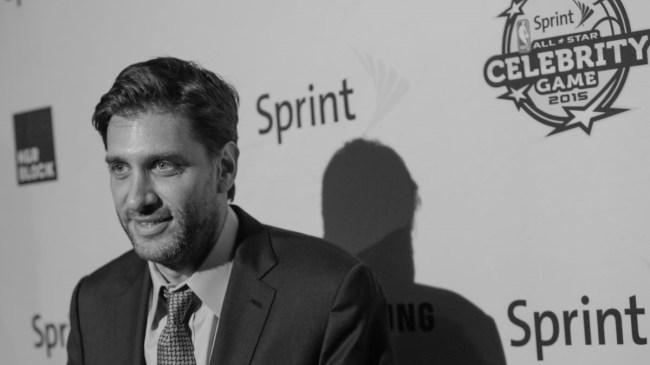 Michael Irvin could be in for a trip to an ESPN human resources training workshop. Well, probably not. But he still seemed to upset one very notable coworker on Monday.

Irvin has been all over the news lately for his hilarious antics on ESPN’s Get Up and NFL Gameday. No matter where you look, everyone seems to love Mike. He was even recently spotted showing up to surprise birthday parties.

You ever have a birthday party in your backyard with your closest pals and then…..Michael Irvin walks in??!??? pic.twitter.com/aXqRCCqbO3

But it appears Mike is still learning a little bit about boundaries. He displayed that fact on Monday morning’s episode of Get Up when he showed a little bit of love to co-host Mike Greenberg.

Michael Irvin Grosses Out Mike Greenberg With Kiss On The Cheek

Greenberg was talking about the Dallas Cowboys when he started to send the show to commercial. As he did that, Irvin reached over and put a hand on his shoulder in agreement with something Greenberg had said previously.

Irvin then proceeded to plant a big, fat, wet kiss on Greenberg’s cheek.

This wouldn’t be a big deal for the average person. After all, Mike is just showing a little bit of love for his guy. But there’s one problem. Greenberg is an absolutely huge germophobe and seemed immediately weirded out by the whole deal.

How much of a germophobe is he? Take this quote from Kevin Clark’s Slow News Day where Greenberg revealed that he uses a knife and fork to eat all foods, including pizza, wings and sandwiches.

“There is nothing you should not eat with a knife and fork except for things that must be eaten with a spoon,” Greenberg told Clark.

Eating pizza with a fork and knife is bad enough, but I’m not even sure how you would eat wings and sandwiches with utensils.

What about fries and tots?

Greenberg is clearly a neurotic a level of germophobe and we can only imagine he quickly ran to the bathroom during the commercial break to wash his face.