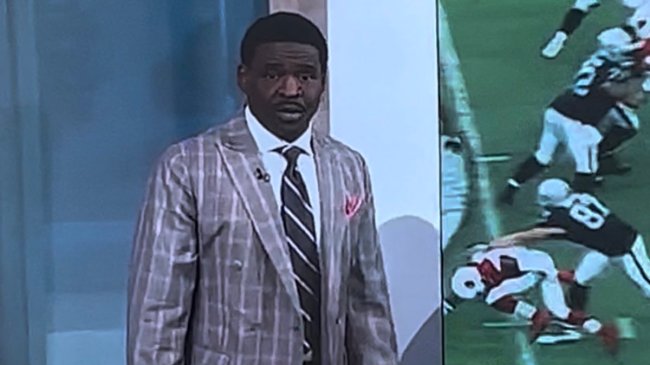 Yesterday, as I was watching the variety of NFL pregame and postgame shows that air throughout a regular fall Sunday, I found myself thinking: “Wow… a lot of these are really bad.”

Whether it’s the perpetual awkwardness of ESPN’s Sunday NFL Countdown — if I ran ESPN, I’d swap Laura Rutledge and Samantha Ponder’s roles — or poor Marie Taylor having to rely on Tony Dungy and Chris Simms on Football Night in America, it’s no wonder that the likes of CBS and Fox have stuck with their tried-and-true studio team for years upon years (although some NFL fans think it’s time for certain analysts to retire).

All of this is simply a long way of saying that NFL Network’s NFL GameDay — which features Michael Irvin, Kurt Warner, and Steve Mariucci alongside host Rich Eisen — is one of the better ones, and that’s largely thanks to the always-hilarious antics of Irvin.

Take Sunday, for example, which saw the legendary Dallas Cowboys wideout turn himself into a meme with a deer-in-headlights-look while on-air because he left his glasses at the hotel. As co-worker Connor put it, “3 AM in the doorway saying ‘Mom, I just threw up’ pose.”

No I left them at my hotel. Bro I can’t see ANYTHING 😂😂 https://t.co/DlSnHSzKKE

Given the pure, simple hilarity of Irvin’s confused facial expression, NFL fans naturally found the moment absolutely hilarious and hopped on Twitter to share their amusement.

Funniest hall of famer ever. https://t.co/vmWhPUCHwM

I read that in his voice 🤣 https://t.co/XR4BZGeQMv

I’m dying 😭 why does he look so scared https://t.co/IoQrLVL2mF

Luckily, by the time he made his usual Monday morning appearance alongside Stephen A. Smith on ESPN’s First Take, Irvin relocated his spectacles and was able to actually see the world around him during the broadcast.

RELATED: NFL Fans Are Questioning If Terry Bradshaw Should Still Be On The Air Following Difficult Day Of Broadcasting