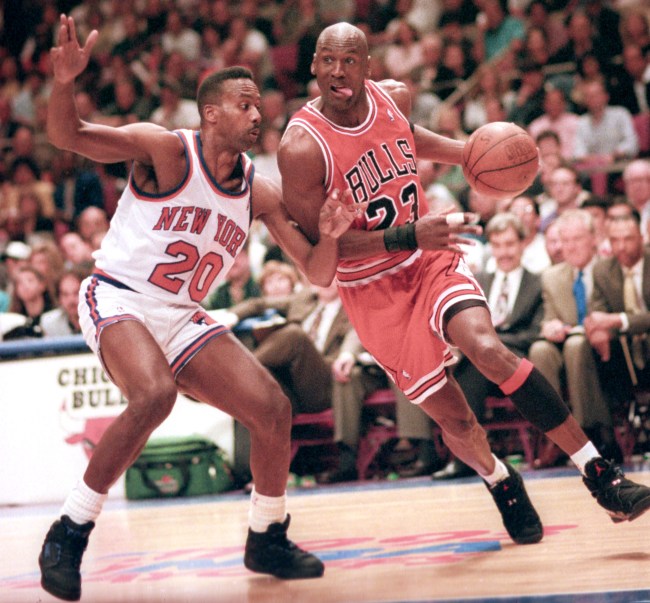 Michael Jordan and the Chicago Bulls were the main attraction of the ’90s, as the team won six NBA titles in a span of eight seasons, and became bigger than The Beatles anywhere they went. While those who lived it remember the madness firsthand, we’re all reliving it now thanks to the ESPN documentary The Last Dance, which outlines MJ and the Bulls’ dynasty during that decade.

Given the extreme popularity of Jordan during his heyday — which is still at an all-time high, even though he hasn’t played hoops in 17 years — it’s unsurprising to hear stories about the many different ways people would try to catch a glimpse of him. Lines around the block for tickets to games. Hour-long waits to (hopefully) catch a glimpse of him at his former steakhouse in Chicago. You name it, people tried it.

Well, one extreme example that someone took for a chance to meet Michael Jordan comes from a comedian named Gary Vider, who posted a story to Instagram that details a sneaky AF way he and his dad used to get access to games at Madison Square Garden during the ’90s — which involved lying about media credentials. No joke, it’s one of the most savage things I’ve heard in a long time, so take a look at how Viner describes it below.

From 1993-1997 My father and I ran a scam saying I was a reporter for Sports Illustrated for Kids and he was a photographer.

My dad would smooth talk our way into games at Madison Square Garden and Nassau Coliseum without a ticket and get us access into the locker rooms.

When we would get in the locker room I would (fake) interview the players, take pictures, and get autographs.

One of the closest calls we ever had was Michael Jordan’s first game back at MSG after he took a year and half off to play baseball.

We’d been to the Garden countless times before but this time an actual reporter and photographer for Sports Illustrated for Kids showed up. My dad made it a point for us to say hi to them, never telling them who we were. I remember thinking as a 10 year old this it we are going to jail.

After watching MJ score 55 points my dad and I rushed to the locker room. Security was limiting how many people could get through, even press. We wound up getting in and the real Sports Illustrated for Kids didn’t.

This pic is from my “interview” with Michael Jordan.

It’s one thing to think about maybe trying this, but it’s another thing for Gary Vider’s dad to agree to do this when his son was 10 years old — but, hey, all was fair game when it came to meeting the great Michael Jordan. The fact that it worked is even more hilarious.

We’ve seen others try to duplicate this more recently, too — like the college student who faked a press pass for a chance to watch the NBA Finals a few years ago — which just goes to show how far a creative idea (and some balls) can actually take you. If you’re bold enough to come up with a crazy lie, and can look confident in selling it, you may just end up getting access to crazy events like these guys did.