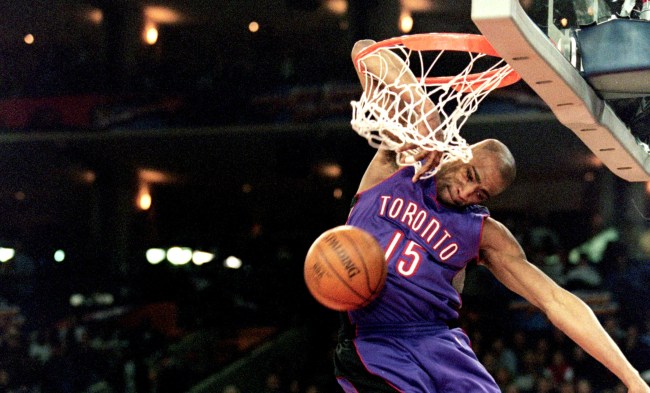 The 2020 NBA Dunk Contest will go down as one of the greatest of all time. The battle between Aaron Gordon and Derrick Jones, Jr. was truly epic. And truly controversial.

It was so good, in fact, that it brought back memories of arguably the greatest NBA Dunk Contest of all time – the 1988 duel between “His Airness” Michael Jordan and “The Human Highlight Reel” Dominique Wilkins.

In the leadup to the 2020 NBA All-Star Game, both MJ and Dominique were interviewed by the Associated Press and discussed the 1988 Dunk Contest, which like this year’s event was held in Chicago, and also is considered controversial by some.

“I did have a homecourt advantage, yes,” Jordan admitted.

“We were foes and we had some great battles, but he understood the moment,” Wilkins said. “He understood what we did, you know? So, for us, there’s no hard feelings. There’s no animosity. We love the fact that they still talk about it because we knew what we brought.”

The 1988 field, for those who forgot or are not aware, was loaded.

Jordan was NBA MVP in 1988 and had previously won the 1987 contest. Wilkins and Michael both averaged more than 30 points per game and Dominique won the 1985 contest. 5-foot-6 Spud Webb was also in the field, having won in 1986, as were Clyde Drexler, Greg Anderson, Jerome Kersey and Otis Smith.

The years in between 1988 and 2020, however, saw some very lean times when it came to the NBA Dunk Contest.

Kobe Bryant won it in 1997 and Blake Griffin took the title in 2011, but we also had guys like Fred Jones as the 2004 champion and Jeremy Evans winning in 2012. If you don’t remember Jones and Evans it might be because they combined to average just 11 points per game in their careers. Which was still better than the Dunk Contest winner just one year ago: Hamidou Diallo.

The year 2000 may have been when the event peaked as Vince Carter put on one of the best performances in Dunk Contest history – one that has gone unmatched in the 20 years since.

In fact, it was so good, that The GOAT himself said, “The most amazing dunk I have ever seen is probably Vince Carter when he hung his elbow in the rim. To me that was, without question, just unbelievable.”

When asked about how the Dunk Contest has changed from back when superstars like them competed they agreed that it’s not the same.

…most of the biggest names — and many considered among the best dunkers of their generation — have taken a pass on the dunk contest. LeBron James has never entered one, nor has Russell Westbrook, and Dwyane Wade didn’t either.

“I’d have loved to have seen LeBron,” Wilkins said.

Jordan agreed, saying he knows fans are clamoring to have seen James try it at least once.

“What we did in the game and excitement that we created when we did dunk,” Jordan said. “People wanted to see that. Is it the same today? Maybe not.”