Dwyane Wade Tweets Out Phone Number For Fans To Send Him Messages, Gets Roasted For Dunk Contest 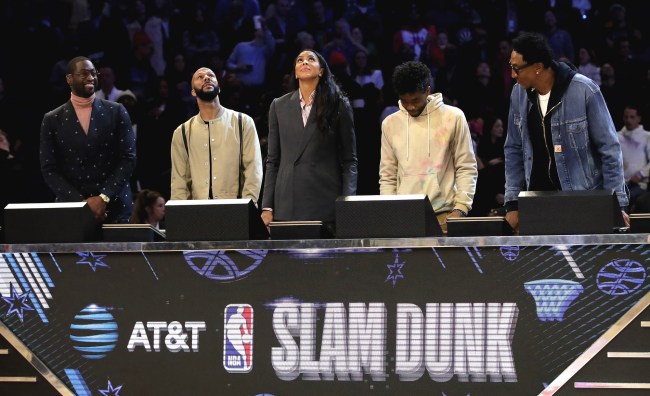 Dwyane Wade has been very busy the past few weeks. He’s been making the media rounds talking about his transgender child Zaya and promoting his upcoming ESPN documentary D. Wade: Life Unexpected, which debuts Sunday, February 23, at 9 p.m. ET.

Beginning with intimate details about his life growing up in Chicago, continuing on through his emergence as a star at Marquette and then with the Miami Heat, the documentary covers every chapter of Wade’s path. From dealing with drug raids on his house as a young child; to becoming a father as a college sophomore; to the long and painful custody battle for his children years later; as well as his relationship with his wife, actress Gabrielle Union-Wade and the challenges they’ve encountered; and embracing his child Zion’s gender identity, the film does not shy away from the difficult topics. With exclusive behind-the-scenes basketball footage – including extensive coverage of the free agency drama of 2010 and the moment Wade learned LeBron James was joining the Heat – plus interviews with pivotal figures from his life and career including Carmelo Anthony, Chris Bosh, Udonis Haslem, Pat Riley, Gabrielle Union-Wade, the film is a memorable look back at one of the defining careers of this generation.

“I’m excited to share a side of myself with the world that not many people may know,” said Wade. “This deeply personal documentary will give fans a never-before seen look not only at the behind-the-scenes of my sixteen year career in the NBA, but will peel back the curtain on my personal life – the highs, the lows and everything in between – showing how I created my own path to get to where I am today.”

Wade has also been in the news this week for his participation as a judge in the 2020 NBA All-Star Game Dunk Contest. Or, rather, how he appeared to have tricked the four other judges and given this year’s title to the Miami Heat’s Derrick Jones, Jr. when many fans believe Aaron Gordon should have won.

“Me reading through my comments like i was the only judge to give out a 9 😂,” Wade wrote on Instagram in response to the complaints.

Wade also, one has to assume because of the upcoming documentary release, tweeted out a toll-free phone number, 1-833-3FOREVA, where fans can text him and leave messages.

After the Dunk Contest debacle, Wade might now be wishing he had rethought the timing of this move. (Also, Larry Johnson is going to lose his mind when he sees Wade’s eye in a faux Illuminati symbol.)

The message one hears when you call Wade’s phone number is, “What’s up? This is D-Wade here. Thank you guys for calling me and leaving messages. I appreciate all the love and support that you guys have shown through the years. I cannot wait to listen to your messages. Just know that I love you guys. Peace.”

If the messages people are leaving are anything like the Twitter comments Wade has been receiving he may actually want to wait to listen to them.

Love you chief but you rigged the dunk contest

@2LarryJohnson7 what the eye 👁 all about on this post?

The Seal of 666, hexagram, symbolic representation of the Talmudic God of Kabbala