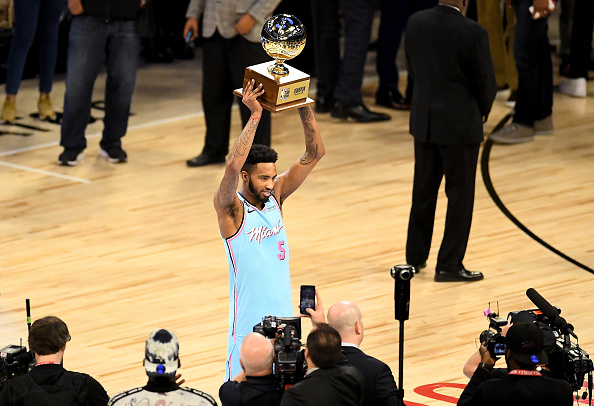 On Saturday, basketball fans were treated to a pretty good dunk contest. It seems to happen every 3-4 years (note: whenever Aaron Gordon agrees to do it), and this year turned out to be one of those good years. Much like the 2017 contest—which, nostalgia for Dominique and MJ and Vince aside, might have been the best ever—this year came down to two guys, dunking way beyond the dunks they had prepared, because the judges wanted to milk them for all they were worth.

Derrick Jones Jr was great, make no mistake. The guy threw down a couple dunks that illustrated that he’s probably one of the most athletic people alive. His 360 through-the-legs, spinning against the grain, was great. As was his alley-oop, off-the-backboard through the legs over that DJ Khaled-looking guy. And that side-backboard, through-the-legs oop was pretty awesome. But do you know how tiring it is to type “through-the-legs” with all those hyphens in three straight sentences? About as tiring as it is to watch a guy dunk through-the-legs in every single dunk except one.

That’s the problem. You ever hear that stupid saying about a guy who complains he’s bored of sleeping with his rocket wife? “Give a guy steak every night, he’s going to get tired of eating steak” or some bullshit. It applies here, too. You show me five different through-the-legs alley-oops, I’m no longer impressed.

Back in the day, Jason Richardson would go through-the-legs once per dunk contest, and it would always bring the roof down. DJJ did it so many times that he made it seem… easy. Not for us, but for him. I like to believe that what you’re doing is difficult, for you. That’s part of why I loved the Aaron Gordon 360 cuff dunk so much: he missed on his first attempt, which made it clear how hard it is to get that rotation and timing right.

The best dunk of the night, by far:

at least we get to watch Aaron Gordon‘s one-handed 360 windmill off of Markelle Fultz’ lob off the side of the backboard on loop for eternitypic.twitter.com/ZhbbYKmIY7

(How great is this photo?)

This 360 by Aaron Gordon is one of the best dunks I’ve ever seen. pic.twitter.com/iogLKoa030

Kenny said it best: Aaron Gordon is the most unique dunker in the history of the contest. And instead of rewarding him for that, the judges continued to give 50s to both finalists to see how deep his bag of tricks would go. The result was an anticlimactic final dunk from both guys and whispers of collusion and influence among the judges. The entire thing devolved into some kind of playground popularity contest. All semblance of impartiality was gone. Look at this shameless contrivance: 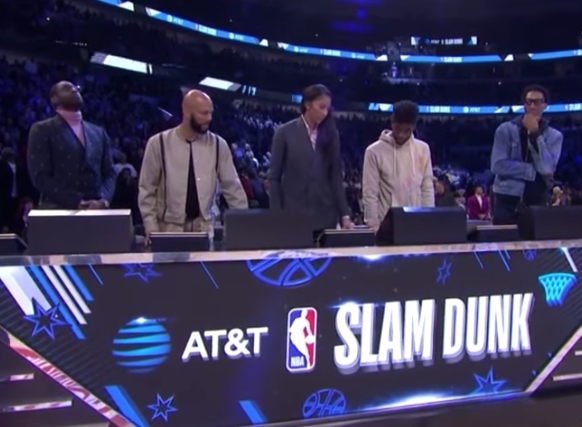 Later, it would be revealed (or at least hinted) that Dwayne Wade had rigged the final vote so that his Heat contestant would win. But it should never have come to this.

We shouldn’t expect the dunkers to come up with two-three additional dunks beyond what they were expected to bring. That leads to the sort of last-minute improvisation we saw from DJJ’s inside-the-free-throw-line windmill and Gordon’s jump over Tacko Fall—both dunks that received less than 50. Ironically, I felt like those were two of the only fair scores we saw (Gordon’s balls were all over Fall’s neck, and DJJ was so far inside the line).  And for this contest, which saw nine fifties in a row between these two guys, to end on sub-fifty dunks? What a letdown.

The three-point contest has gone the way of gimmicks. They added that absurd green ball and the whole rack of bonus balls and, whatever. I’m not saying the dunk contest needs to become a shitshow of gimmicks, but there needs to be some sort of process in place to prevent the judges from 50ing the whole thing down the drain. Maybe they bring back decimal point scores? Or each judge scores it out of 100 instead of 10?

Whatever it is, the fact that Aaron Gordon has not won a dunk contest is fucking ridiculous.