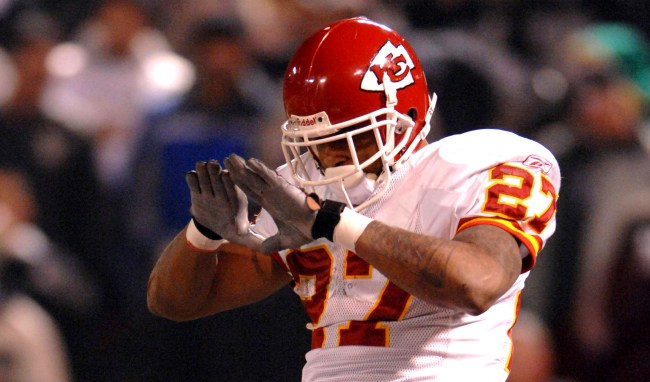 On Tuesday, former NBA star Dwyane Wade appeared on Ellen to discuss how he embraces and supports his 12-year-old’s gender identity.

Wade and his wife Gabrielle Union both came publicly this week in strong support of Zaya Wade, the child whom Wade had with his ex-wife Siohvaughn Funches.

Meet Zaya. She's compassionate, loving, whip smart and we are so proud of her. It’s Ok to listen to, love & respect your children exactly as they are. Love and light good people. pic.twitter.com/G2lLVdD2VT

This important moment for Wade’s family proved to be too much for former NFL running back Larry Johnson, who has taken issue with Wade in the past, and is well-known for spouting batshit crazy nonsense on social media about the Illuminati, the occult, the NFL and NBA’s “effeminate agenda” that is being pushed, and anything else that pops into his not at all CTE-damaged head.

Back in December, Johnson accused Wade and his family of being freemasons who “believe in sacrificing a child or their child to the doctrines of demons, doing what he’s told for worldly wealth.”

His twitter avi is him (symbolically) standing with his hands in a pyramid.

…Freemasons believe in sacrificing a child or their child to the doctrines of demons, doing what he’s told for worldly wealth. pic.twitter.com/tkqLv56VFl

On Tuesday, he was back at it, responding to a video of Wade’s appearance on Ellen, tweeting, “Wade fathered another child outside of his marriage. Gabby, tho suffering multiple miscarriages, signed petition in protest of ‘HB481’. Black trans teens suffer higher risks of suicide/ideation. As a FATHER, I look to The Most High God, I don’t whore after the Baphomet.”

Wade fathered another child outside of his marriage.

As a FATHER, I look to The Most High God, I don’t whore after the Baphomet. https://t.co/VsWY8GguPn

Naturally, Johnson got what he wanted from the Twitterverse – a strong reaction – including a surprising number of which actually supported his stance.

D.Wade allows his current wife G.Union to use his son from ex-wife for PRIDE activism. This is child exploitation.

Imagine speaking to Ellen Degenerate, the pro-infanticidal maniac who's entire career purpose is to push FBI propaganda that subverts and destroys the social order.

I always thought he was a part of the Satanic Cabal, I'm even more convinced now.

Black trans teens are at higher risk of suicide/ideation specifically because of rhetoric like yours - because they're constantly told that what they're doing is sinful, because they are berated and abused by a culture that doesn't accept them. Wade's not the one off course here.

Watch Wade’s entire segment on Ellen below where he also talks about the passing of his friend Kobe Bryant and decide for yourself if Wade is part of the Illuminati.